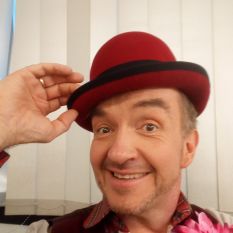 has been a stage performer since age eleven. His trilingual, artistic upbringing, as the son of Gun Kronzell and Herbert Moulton, lead to a hundred stage productions, countless cross-over concerts, work as a bandleader and as an acting teacher.

He is a regular contributor for Idea Gems, has written for Shadows Express, Cover of Darkness, Vocal Images and Pill Hill Press. He is a tourguide, a big-band-vocalist, a filmmaker, a painter, a voice-over-speaker, a translator, is married and has a daughter.

His flash fiction piece “The Vicious Void” will appear in Blood Moon Rising in January of 2015. Among his three dozen other published literary pieces, included in academic journals, newspapers and magazines, you will also find: "A Match Made in Heaven" (TWJ Magazine, August 2014), "Crack of Doom" and "The Next Turtle" (Aphelion, August 2014), "Catherine - The Faithful Queen Dowager" (Socrates - The World's Leading Academic Journal, June 2014), "Vocal Technique" (The Woven Tale Press, April 2014), "Future Memories" (Contemporary Literary Review India, November 2013) and "Echoes of a Fairytale" (Skirmish, July 2013). He had also built up a considerable online platform for himself through online blogs and posted literary work, gathering a worldwide following of by now several hundred thousand people. His creative work includes being an accomplished stage performer and the musical director of a chorus in Central Europe.

Are We Really as Smart as We Think? By Charles E.J. Moulton

Mankind prides itself as creation's glory. But are we really? Once we dig deeper, we see that nothing is what it seems. What is real? Your personal experience.

Heaven is a Place on Earth By Charles E.J. Moulton

The soul is the only real thing in the universe, so use your buzzing energy to create a Heaven on Earth. You'll take it with you when you go.

The Art of Creating a Star in 15 Minutes By Charles E.J. Moulton

Once you become a star, you realize it is totally different than you thought it was. You are treated like a golden keg in a celebrity machine. You don't change. The world just spins faster around you. But if you make a mistake, your world explodes.

The Game of Reincarnation By Charles E.J. Moulton

Some psychological problems have their origin in past life problems. Once I searched my feelings, there was no turning back. I know who I was in an earlier life...

You Control the Waves By Charles E.J. Moulton

Quantum truth now meets spiritual physics. We are living the quantum revolution, we cease to be victims of a hoax and become princes and princesses of a spiritual paradise. You are the wave. The spirit and the energy. Believe in your own power.

The night is like a straying cat, its shadows stuck to the pavement like glue. I find myself sauntering home after a long day, feeding myself beer and chocolate, handed to me by my imaginary angel, waiting in the twilight.

Since Niels Bohr discovered the buzz and whirl of electrons, physics has not been the same. We now are close to proving parallel realities exist...and we're not far from proving the existence of the soul and...God.

Sammy finds himself lost in a mirage of desolate railway stations. All he wants is to come home.

A Man They Called the King By Charles E.J. Moulton

A call beyond the grave reaches Roger as his blood sugar tumbles ... and he realizes who he is and why he came here in the first place.

Our lives travel seven paths and those are poetically described in this poetry collection: flight, fun, freedom, love, purity and diligence. The centre of all is the soul.

In the beginning, Adam loved Eve, created children in the open and lived spiritual equal amongst the animals as an eternal soul. Civilization mislead him. It was time to redeem him.

Our spiritual energy consists of higher electrons. When we pray, we send out these electrons to our source. We are creators. Make sure that your children are free to excel for everyone's benefit. God, she will thank you for it.

The Legend of the Idiots By Charles E.J. Moulton

A father tells his son that everyone's a fool except them. The kid goes out to check his Dad's words. He finds out that his father was wrong. The culprit? Ignorance!

The Lunts on Broadway By Charles E.J. Moulton

This excerpt from a play by my father Herbert Eyre Moulton depicts the life and times of a distinguished theatrical couple: the Lunts on Broadway.

Leading the Way or The Art of Music By Charles E.J. Moulton

There are only two kinds of music: good and bad ... all of us are musicians, there's more classical to us than we think.