“Hello!”
“Hello Baby!” spat came the answer.
“I…I beg your pardon!”,-I stammered.
The phone went dead!
Well, this was the third time in a week that I had received this call.
It had been two decades since I had heard these two words. The memories were returning in a flash. Suddenly, the door opened and a head popped out from behind it. The inquisitive eyes looked at me appealingly.
“The phone was for Hello Baby!” I said as I put down the receiver.
His eyes lit up and he flashed up that million dollar smile that he had inherited from his mother. Then it vanished as deceptively as it had appeared.

The newspaper that was stinking with the bickering of the politicians, of the murders and of the rapes, was as distasteful as the cold tea. Yet, I picked up the piece of bone china and gulped the cold liquid down. Folding the newspaper neatly, I placed it carefully back on the table. I advanced towards the forbidden territory and gently pushed open the door. I was greeted with blazing sound blaster and Ricky Martin’s “Maria”. The ultra-modern radar had already been installed and was put to work the moment my alien foot violated the forbidden territory. I suddenly became the cynosure of the eyes of a thousand celebrities, who adored the walls. The eyes were of sports personalities, music buffoons whose fate changed with the changing winds. The once blue distempered wall bears the blunt of their creativity, a real testimony of growing up. Yet the most haunting of those were a pair of innocent looking eyes which were analyzing each move of mine. Yet, giving the impression that I was too engrossed in their own activities.

Suddenly, “Rambo” adjusted his imaginative bazooka and fired at me. Well, it always has to be a direct hit otherwise the fun goes amiss. So, I grab my chest and start to sink. Yet, just as a villain tries till the very end, I manage to pull the last “grenade” from my kurta pocket and toss it towards him. He rolls across the “rough terrain” taking the bed sheet with him. Then he stands up and jumps into my arms and quips up “Pop, you always make mistakes!”
I look at him intensely and asked “What went wrong?”
“You forgot to pull the pin out of the grenade” –he retorts back.
“Then why did you roll over?”
“Just to please you” came the reply.

My Rambo becomes Captain Spark, commanding vast uncharted territories of the outer space, whose laser gun flashed at the slightest provocation. Deep inner space, sometimes gives way to the arid Sahara. Mirages conjure up unmustered by Mandrake, as my Tintin strolls across the endless sea of sand, falls unconscious, revives at length and quenches thirst at an Oasis. Sometimes he emulates Sachin Tendulkar on a rampage, and sometimes Jonty Rhodes. The Bazooka sometimes turns into Sachin’s super heavy club, sometimes into a laser gun. Well, corresponding to the vast uncharted territory, which stretches from the outer space to the very interiors of Africa, its domain is actually limited within the small bed, which antagonizing squeaks out in agony for itself, unlike me.

Against such a violent backdrop, stands my “DiCaprio” whose million dollar smile must have floored a thousand lasses. Yet, I feel my “Milind” is a victim of the cruel Cupid. He constantly adjusts his hair style, croons, and his impatient looks make me feel, who is his ‘Kate’? The agitated phone suddenly cries out hoarsely as sanity returns. The blazing sound blaster is turned off hurriedly. He rushes off immediately to answer it. He returns with the hand set and throws himself down on his disheveled bed. The sound boxes are at work again, as secrecy is maintained in appropriate silence of the music. Meanwhile nimble footed Bubka jumps down because the Cartoon Network is presently showing the “Mask”. As Santana finishes, A.R Rehman takes over. Meanwhile, the phone is placed back in a hurry. The wardrobe is yanked open, and a quick analysis is done before choosing a certain denim, which is yanked out from it. A real cocktail of deodorants invades the atmosphere. Within seconds he is ready to depart. After giving the finishing touches in front of the mirror, he turns around and seeks permission.

I ask “Was it from Hello Baby?”
He blushes and scratches his head and looks away.
“Shouldn’t be late!”
His face glows and he smiles before departing hurriedly.
The smiling photograph on the wall, suddenly reminds me of my fate as loneliness gripped me again with its tentacles. It’s been two years since she has departed, leaving behind her smile in her son. An unblemished asset that had won my heart as a teenager, and now that dagger keeps digging my wounds to keep her memories alive in my heart, soul and intellect. I would have been nothing but a living dead had it not been for my two boys. Yet, I remain the perfect “Happy Father” to my sons and the “Happy Man” to the outside world.

I didn't really understand the story until the end, and then it made more sense. It also made me sad. Thanks for sharing this sad sweet story with us, Shamik! : )

I didn't really understand the story until the end, and then it made more sense. It also made me sad. Thanks for sharing this sad sweet story with us, Shamik! : ) 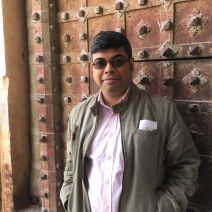 Well, not all stories have a happy ending.Generally I don't like to write these sort of despondent stories, because it makes people sad. But sometimes we have to understand other's pain to realise ho... Read More

Well, not all stories have a happy ending.Generally I don't like to write these sort of despondent stories, because it makes people sad. But sometimes we have to understand other's pain to realise how fortunate we are not to be touched by sorrows afflicting others. I guess, sorrow and happiness are the two sides of the same coin, that's life I guess!