With a deep breath, Jack took in the crisp mountain air and reveled in his surroundings. At ten thousand feet and twenty miles from the nearest road, he was as far away as he knew how to get from civilization. Without even the noise of aircraft overhead, the only sounds were the creaking of the trees and the wind whipping his tousled hair. The summit had been a tough climb since this was not a tourist destination, but rather a right of passage for those who lived in the backcountry of his little corner of Colorado. He had not seen another person since he started his hike before daylight, and he was confident he would not see another before the sun had set for the night. The only question on his mind now was how long could he enjoy the view before his return?

Jack sat down and opened up his daypack and took a long drink before starting to reapply sunscreen. He had done this hike before and learned a red and painful lesson about high altitude expose without precautions. As he rooted around in his bag, Jack noticed a subtle change in what little forest there was at this height. First, the steady drone of the cicadas cut short gradually, but it was the second change that made him stop short. Replacing the familiar noises of nature came a sound like wind buffeting off something moving very quickly, like a semi-truck, but without the roar of the engine. Jack looked up just in time to see a ball of metal rushing toward him at ridiculous speed, a small window revealing a creature inside whose only identifying feature was what Jack could have sworn was fur.

The vehicle passed not but fifty feet over Jack’s head and the hot wind coming off it sent him rolling even from his seated position. He finally stopped his tumbling after a few painful bounces, lying facedown on sun-warmed stone. The prone hiker groaned from his uncomfortable position and listened to the path of destruction the falling ball was creating. When curiosity overcame pain, Jack slowly pushed himself to his feet and stared back down the way he had come. He had no idea what caused the smashing and uprooting he saw before him, but he was pretty sure the park rangers would not be pleased with the damage that had been done. After a few moments pause, Jack started to cautiously pick a path down through the rubble toward the unknown craft.

It took about fifteen minutes to make it to the source, for the momentum had taken nearly a mile to die down. When at last he arrived, the situation took an even more confusing turn. The spacecraft, for that is undeniably what it was, was completely undamaged in spite of the swathe of destruction that lay behind. It had a podlike shape which was almost perfectly round with slight backward-facing bulges that could only be the engines. The front sported a hole which had once been a covered window, but currently in that place a long furry tail waived in the air as its owner rooted around in the ship.

Jack truly wanted to investigate further, but simple apprehension held him in place. Any sane person would have suspected that the tail belonged to some wildlife that had chosen to investigate as he had, but he could not shake the image in his mind of the furry pilot he thought he had just seen. Just as he was deciding whether to step forward or speak up, the creature straightened at the waist and stood. Sure enough, though furred and tailed, the creature was humanoid and strangely feminine. With a slender build covered by a canvas jumpsuit, Jack could not help but think that the pilot looked peculiarly feline. Actually, Jack thought, she looks exactly like a cat, down to the whiskers and pointed ears. As if on cue, the ears turned and swiveled about sensing the environment. Suddenly the cat froze, caught in the middle of what she was doing. She spun around quickly and lithely, immediately locking eyes with Jack.

“Whoops.” The word crossed the gap between them in slow motion, or perhaps Jack was just particularly slow to process the fact that he had just heard a bipedal alien cat speaking his language.

“Wait, uh, what?” Jack stuttered and stammered over his words, completely caught off guard by the fact that he was face to face with a cartoon character, or something from a cheesy sci-fi movie. The cat held up her paws in front of her as if to indicate peace or surrender.

“Just,” the cat started slowly, “forget that you saw me and pretend that I was never here.” Almost comically, her eyes scanned back over the environment that she crushed, probably trying to will it back to life. “I’m just going to fix my ship and I’ll be off your planet and never tell anyone that I was here.”

“Do you need help?” Jack had finally found his words, but had not thought that question through. What could he do to help? Did that futuristic ship have a spare tire that needed changing? Should he look under the non-existent hood and make up a diagnosis involving a carburetor? This first contact was not off to the best start. Jack started to walk forward.

“No no, please, don’t get any closer. I’m forbidden to share my technology with underdeveloped worlds.” The alarm was evident in the girl-cat-alien, and she made a move to shield her craft with her slight body.

“Underdeveloped? We have computers and we’ve even traveled into space.” Jack said, feeling some need to defend his species.

“Yeah, but you have only set foot on your own moon,” she said with a tone less flippant and more matter-of-fact,“ and your computers use sensitive instruments made of silicone and copper, not crystals -“ The cat stopped short, aware that she had already said too much. She shook her head and went back to her work, this time not-so-gently tapping the inside wall with a small metal rod.

“Your computers use crystals? Like, as a conductor or a processor?” The strangeness of the conversation had left him and he was curious about how life and civilization had developed in parallel on different worlds.

“Processing partially, but also a myriad of other functions. We use a pressurized gas as a conductor.” She said with a resigned tone.

“Gas? Like in neon signs?” Jack was excited that he was even able to contribute to this conversation.

“Look, I am not familiar with all of your native technology, but no, we do not use neon gas.” Jack thought that over for a moment before concluding that he understood the basic principle.

“Hey, why are you just telling me this stuff now?” The cat crawled in further out of view, but still answered in a distant voice.

“Because you asked.” She stated succinctly. “But also because you already know too much and I’m going to have to take you with me.” Jack took a moment to digest what she was saying before finally spitting out a response.

“With you? Into space? I’m sorry to disappoint you, but I’m not going to change my whole life plan because a cat said so.” The feline’s head popped back out of the ship and looked at him with a smirk.

“Yeah, you are. I cannot risk you sharing this information with your species and violating the Accords. And I do not know what a cat is, but if that is a derogatory name, it was uncalled for.”

“A cat. You know, with ears and whiskers.” Jack said, all the more uncertainly. “You look just like one. A Calico, even.” The maybe-not-a-cat-alien just rolled her eyes.

“I know many species with ears and whiskers. It’s a common evolutionary trait. More unsettling to me are the types without them. Like, how do you even know what’s in front of your face?” The last bit was more rhetorical and less aimed at Jack, so he reined the conversation back in.

“And what would I even do in space? I haven’t been trained and I know nothing about it.” Jack asserted, even as he was starting to warm up to the idea.

“That’s the adventure of it.” The maybe-Calico-girl shot back with a twinkle in her eye. Jack held her gaze for a good while before finally asking.

“Well where would I even sit? It seems pretty cramped in there.” She smiled and flipped a switch. The whole ship hummed to life beneath her.

“Hop in, I won’t bite.” As she said it, she grinned and revealed many pointy teeth. With a resigned sigh, he moved to close the gap between them.

“I’m Jack, by the way.” He said simply to introduce himself.

“Pleasure to make your acquaintance. I’m Ani.” And after he had climbed in she sealed the ship and lifted off, to embark on a brand new adventure that would change both of their lives for the better. No, for the best.

LOVE this story! Still waiting and hoping to read more of your marvelous short stories, Wess. THANK YOU for sharing this fun romantic adventure story on Storystar, and congratulations on being selected as one of the Short Story STARS of the Week! :-)

LOVE this story! Still waiting and hoping to read more of your marvelous short stories, Wess. THANK YOU for sharing this fun romantic adventure story on Storystar, and congratulations on being selected as one of the Short Story STARS of the Week! :-)

Jd is right on. Fun. And who knows where they go. There is a book out there called: "The Hitchhiker's Guide to the Universe," and this could be a different take on that kind of journey. Minus the towel, but with a Calico.

Jd is right on. Fun. And who knows where they go. There is a book out there called: "The Hitchhiker's Guide to the Universe," and this could be a different take on that kind of journey. Minus the towel, but with a Calico.

That was a really FUN read! I think kids and teens would love it too! And, as with all your tales, there is a lot of content here that could sustain further development into a novel or series. I would love to read more about what comes next, but the imagining is fun too! Thanks for sharing your stories on Storystar, Wess! :-)

That was a really FUN read! I think kids and teens would love it too! And, as with all your tales, there is a lot of content here that could sustain further development into a novel or series. I would love to read more about what comes next, but the imagining is fun too! Thanks for sharing your stories on Storystar, Wess! :-)

I think adults will love it as much as teens, Wess! I'll look forward to reading more of the story down the road... :-)

I think adults will love it as much as teens, Wess! I'll look forward to reading more of the story down the road... :-) 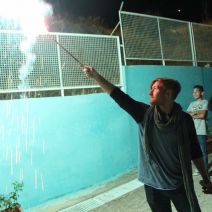 Thanks, Jd! I actually do think I will write more about this one, as I have much more of this world swirling around in my head. You can change the description of this one if you want, because this is... Read More

Thanks, Jd! I actually do think I will write more about this one, as I have much more of this world swirling around in my head. You can change the description of this one if you want, because this is probably more intended for teens than adults. :)