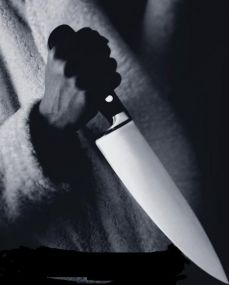 (Note that the author was 17 years old when she wrote this story.)


There were twelve people on jury duty. Six men and six women. Every one of them killed. No one knew who to blame, but they all suspected the prosecutor, Ted Mayfield. He had been accused of killing his wife, Suzanne Mayfield.

Why don't I just tell you the whole story, from the morning court was first in session. The jury members were told to take their seats, as the baliff announced that court was in session. "You may now be seated", he said. Everyone had taken their seats while Mr. Gills called up his first witness. After about ten minutes or so, Mr. Shell, Ted's lawyer, brought up his witnesses.

It continued this way for about another hour or so and then it was time for everyone to go home. The judge announced that the very next day, the jury should have a verdict. When that day came, Mayfield was found not guilty. Five days later, the killings began.

The twelve jury members from the Mayfield case were Karen Lily, Jalessa Banes, Diane Rolex, Jane Martin, Louise Territony, Tracey Minelly, Ben Haste, Michael Turner, Eddie McTroy, Eugene Terron, Eric Bondelli, and Jon Livington. If only they had known how miserable their lives were about to become. Jon Livington was at a restaurant with his wife, Linda. It was their tenth anniversary, and so they wanted to make it special. It was special alright, but for the worst, not the best. Jon and his wife were talking, when he had to go to the men's room. When he got to the bathroom, he began washing his hands. No one was in the bathroom at the time, but then out of nowhere someone came up from behind him and wrapped a rope tightly around his neck. He struggled and fought but the other person was too strong. Jon's face turned purple, then blue as he hit the ground with a loud and deafening thump. Someone found him in the bathroom about five minutes afterwards and called the cops.

That same night, Louise Territony was in her bathroom fixing her hair. She had long sparkling brown hair, and a smile that could make any guy melt. She was about to get in the shower when she realized she had left her shampoo in her bedroom. So she went into her bedroom, over to one of her drawers, and found her favorite Dove branded shampoo. When she turned around, she was attacked with a large dagger, twenty-four times, blood flying everywhere. She yelled and screamed for help, but by the time her neighbors came to her rescue, her killer was gone and she was dead.

Now the police began to get suspicious . Two jury members who were on the same case, killed on the same day? Was it just a coincidence? They decided not to assume anything right away. But after four more strange occurrences the following day, the police began to pull suspects. Jalessa Banes' body was found in the city's dumpster, about three blocks from her house. At first the police could not make out the body because it seems she had been cut up, piece by piece. Investigators found the murder weapon, which was an electric saw, buried not too far from her.

Tracey Minelly, Ben Haste, Eddie Mctroy, and Diane Rolex had all been reported missing by family members and friends. Usually, search parties are only sent out when people are missing for over twenty-four hours, but since all of these people were previous jury members on the Ted Mayfield case, they made an exception. After about an hour of searching, all four bodies were finally found at the same location. Apparently the killer, whoever it was, locked all four of them in a deserted cabin out in the woods, behind the old abandoned county jail. They were handcuffed. The killer then lit the place on fire and went on to his next three victims, Karen Lily, Jane Martin, and Michael Turner. Witnesses claimed to have seen someone drag three bodies out of the back of their trunk and throw each one into the lake close to the city jailhouse, two blocks from the police station. Police went to check it out, and sure enough they were also jury members. They realized that the only two jury members left were Eugene Terror and Eric Bondelli and they knew that the two were in great danger. By the time the cops were able to warn them, Bondelli was found dead near his home from an "accidental" fatal car crash.

Who was doing these awful, inhumane things? And how were they moving so fast, escaping the cops every time? They wanted to put Eugene Terror in a witness protection program, but he refused to leave his family behind. A day later he was found buried alive in the town cemetery. He died from severe hyperthermia and suffocation. After that, the killings stopped. But why did they start? Who had done it? Later on that day, they brought in Ted Mayfield for questioning. It turns out that Ted had been two states away while these murders were taking place. He even had over ten witnesses to prove it, so they let him go.

But I knew Ted didn't kill the jury. I know because I killed them. They all deserved to die because they couldn't see the truth and they let Ted Mayfield walk free when he should have been convicted. Suzanne, Ted's wife, was MY daughter. She'd call me every other day telling me how badly Ted was treating her. One night she called and told me he was physically hurting her and that she was scared for her life. I told her I was coming over, but when I got there, Ted was gone and she was dead. He had beaten her to death with a baseball bat. Ted had never met me before because I never liked the idea of my daughter getting married in the first place, which is why he didn't know I was in the courtroom. The jury should have seen past his lies. But because they didn't, they HAD to pay. My next mission is to get rid of Ted and then I will be satisfied. I know what you're thinking. You're probably thinking that they'll catch me, right? Wrong. No one will ever suspect it's me. I mean after all, would YOU suspect the judge? ..........Exactly.