A Friend to Remember 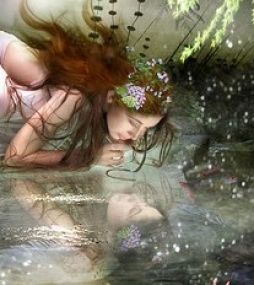 (Note that the author was 13 years old when she wrote this story.)


Once upon a time there was a very lonely girl that had just moved to a new city. She was a small town girl, and was frightened by all of the people and tall buildings. She lived in a small house on the outskirts of the city where the warm wind blew and the soft sun glistened. She would spend many of her idle hours outside by her secret pond behind the blackberry bushes, whispering secrets into the clear, glassy water, or basking in the sun. Sometimes she would make little rafts out of twigs and leaves and float them across the pond, or use the spiny grass and pine needles to sew patterns into leaves. But the girl was lonely. She longed for a friend to play and laugh with, tell secrets to, and do all the things friends did. So every day, she would spend an hour or two making a little twig girl, with extra care, all the while wishing for a friend. Then she would play with it, treat it like a friend. She would skip through the flowers, doze in the grass, run alongside the wind, then at the end of the day, she would drop her twig friend into the pond, and wish for a friend.

Days passed, months past, and almost 1 year later, the usually hopeful girl was starting to lose hope. the days grew colder and quieter, the cool winter air empty of her laughter. Then, on her birthday, the girl decided to try one more time. She made a beautiful twig girl with a small white heart-shaped dot right in the middle of her forehead, and, with all of her heart, wished for a friend. She wished and wished, and when nothing happened, the girl was heartbroken. She cried and cried into the deceitful pond that led her to believe, only to let her down in the end. She bitterly wept until she could no longer take it, and ran into her house.

The next day, the girl, still soaked in misery, went down to the pond. One last time, she talked to it, told it her secrets, and again cried into it. As she sobbed, she heard the sound of her tears hitting the pond getting softer and softer, until they could no longer be heard at all. The girl looked up, surprised, and saw a strange shine to the water, as if it was mourning her lack of belief in it. The water rippled, and the hundreds of little twig girls she had made slowly surfaced. The last, most beautiful one didn't come up. The pond spread its sparkling water to either side, making a dry pathway through the middle, where there sat the last beautiful doll. The girl cautiously walked in and picked it up, and the water started swirling around her, gently taking the doll form her delicate hands. The water went cloudy, and when It cleared, there was a girl her age, standing in the water. The child in the water was beautiful, with long, auburn hair, and a a kind, smooth face. As the child stepped out of the water, the girl noticed a small, white scar on the child's forehead, in the shape of a heart.

The child held out her welcoming hand, and the girl eagerly grasped it tightly, lacing her fingers around the child's. A strange shimmer in the child's eyes told the girl that she had finally found a friend.