Two Halves of the Orange 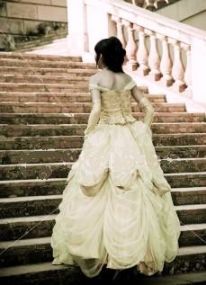 (Note that author was 16 years old when she wrote this story.)


I promised to marry him. Ever since I was a three-year-old princess with the world wrapped around my little finger, Xethro has been beside me, sharing every moment with me. On our tenth Christmas, we were standing in the courtyard behind the castle, staring at the perfect bright globes in our hands: oranges, a rarity only received on birthdays or holidays. Xethro took my hand and laid it on top of his arm. "Pretend that this orange is a ring," he said, placing it into my open palm. He then kneeled down on his left leg, switched to his right, then back to his left. "I think it's your right knee," I offered. He grinned up at me and quickly readjusted. "Princess, do you promise to love and cherish thee until death do us part? I mean, that is, will you marry me?" I remained silent for a moment, thinking. I knew marriage had to do with two people living together. That would mean I could see him everyday! "Yes!" I cried and threw my arms around him. "Not now!" he replied impatiently, then cleared his throat. Xethro carefully removed my arms and ceremoniously peeled the orange, placing half of it in my hands, the other half in his own. Slowly, carefully, he fed the pieces to me one by one, sticky juice running down my chin and onto my dress. We smelled of some tropical island on the other side of the globe for weeks after that.

Then everything changed. It started with the little angel. I knew my mother's stomach was growing, but I guess I didn't understand that inside was life, something that would breathe the same air I did. I entered the room, smiling happily that morning, the sun filtering through the stained glass windows, when my maid, Alexia, grabbed me by the arm and motioned for me to be quiet. I looked at my mother and father: all smiles, but not at me. I saw little arms and legs poking out of a tiny bed. "Come see the little angel!" Alexia cried. I cautiously peeked over the side of the bed. The first thing I noticed was the blue. Blue lips, blue veins, and above his nose pale, translucent remnants of eyelids closed in sleep, hiding tiny blueberries underneath just waiting to be squashed with one solid push of my pinky. This is what they called an angel! I hadn't seen anything more ugly. I rushed out of the room, the stained glass suddenly not as beautiful as it had been.

Eventually, Mother thought it wasn't right that I should be with a servant boy while I was of marrying age. "Princesses," she said, "don't keep company with servants. It isn't proper." I hated proper, and I hated being a lady, so I just kept seeing Xethro, except now our meetings were furtive and brief.

"I have something to announce," my father said one day at the dinner table. "Now, I know we had planned for Julia to be queen," he looked straight at me, his eyes blue marbles. "But, since Alexander has arrived, there has been a change in plans." He didn't need to say any more. The sugared cranberries on my plate, usually my favorite, lost their taste, no longer sweet. My six-year-old brother grinned cheek to cheek, his little dimples diving into his fat face. I could have slapped him. I took my goblet of wine and poured it over his head before anyone could stop me. He grabbed my arm and redirected the liquid. I punched him straight on his nose. Blood poured from it, mingling with the red wine. I cupped my hands and gathered the blood, each drop a stronger taste of my hate.

It wasn't a surprise when my parents called me to the meeting room the next morning. My brother was there, of course, the all-important heir to the throne. I would've punched him again had he been closer to me. "Julia, by order of Law XVI," my father said, his eyes darting everywhere around the room except to me, "I hereby banish you from the castle for trying to kill the heir to the throne." "Because I am mer-mer-ciful," my brother said. He couldn't even pronounce the word; I wondered if he had any idea what it meant. "You aren't going to be beheaded. I give you this ring as a token of my ch-charity." He placed it in my palm, and a servant rushed me out of the room before I could throw it into his smirking face.

I kept the ring, though. I'm wearing it now as I write, twirling the shiny gold around my finger again and again. It's taken awhile, but I've finally gotten over the hate I had for my brother. I suppose I keep the ring as a sense of security, so that if anyone asks or cares, I can show them that I once was part of the royal family.

The girl runs barefoot along the dirt path. Her brown hair streams out behind her as the wind whistles through it. She stops at a market stand, shocking the fruit-seller by being able to buy such an expensive fruit: an orange. She continues on her run. Finally, she stops at a clearing. A boy, no, a grown man is waiting there for her. She bends down on the ground, the shiny globe in her hands a replica of the sun. "Will you accept this orange?" The man slowly brings her to her feet, taking her hands in his own. His thumb and index finger wrap around a gold band on her hand. "Do you need this?" he asks. The girl shakes her head. He throws it far, where it lands in a puddle and is stepped on by a passing horse. The man turns his face back to the girl, now a grown woman, and, slowly peeling the orange and breaking it into half, says, "Yes."