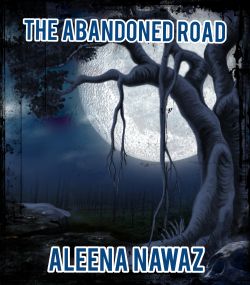 "The Abandoned Road"
by Aleena Nawaz

Horrified she was, as she traveled through that road. Obviously it was gruesome because she was all alone on the road. Outlandish darkness of mid night, preposterous voices of animals, spider nets everywhere, and most significantly the sense as if someone were chasing you.
“It was mandatory to reach the destination on time that's why I have taken this road. Next time I will never travel through this road,” said she.
There was something queer at that place. Something awkward. Suddenly, she saw white bright eyes in darkness of night. She was filled with fear.
“What was that?” She asked herself.
As she was walking, all of a sudden two hands from behind caught her legs, making her unable to move. As she looked back, there were only two hands holding her legs, rest of the body was missing. She fell on the ground and a peculiar creature suddenly appeared. Dark colored, white eyed, opened white hair, horrible face.
“They killed me, they murdered me,” uttered the terrible creature. There was grief and aggression in her voice.
That thing cut the girl into two parts. Since then People had stopped travelling through that road. Abandoned road was located in a town named Fantasma. Mostly the people had migrated from Fantasma because of that road. Only a few people were still living in that town. One family consisted of a young man named Jack and his wife Terra. Jack worked in an office far away from his house whereas Terra was a housewife. Jack didn't believe in the existence of phantom on abandoned road whereas Terra believed in it.
“Promise me that you will never travel through that road,” said Terra.
“O! Come on! I didn't believe in such ridiculous stories that the people of the town had circulated. They would have created such stories for their enjoyment. Don't worry, everything would be fine,” replied Jack.
Jack used to return from his office in the evening. However, one day Jack's boss ordered: “Jack! Today, you'll have to complete all work, there must be no pending work.” Jack said: “Ok, sir, I will.”
Owing to immense work, he was late. The taxi used to drop him at the beginning of the town, far away from his house. Because the outsiders were scared to enter that town.
As Jack was walking he found that the main road was blocked by a large tree that had fallen on the way.
“O! What I should do now? Terra must be worried about me,” Jack thought.
Then he hit upon an idea of travelling through the abandoned road. Because it was the only shortcut to reach his house.
“Let me explore the reason why people of Fantasma termed this road as abandoned road,” Jack thought.
It was about 12:00 am. He was walking on the road. He felt that something was walking behind him. However, he didn't pay heed to it. He continued to walk. However, he again heard the sound of footsteps. When he looked back there was nothing. as he turned his face to the front he saw an old lady standing in front of him. Her face was full of wrinkles. And her eyes were closed. Her color was very black like coal. Jack said: “Do you need any help lady?”
The woman didn't say anything. She just started laughing horribly. The man then looked at her feet. He found that her feet were not there. Her legs were stretched and her feet were present at the beginning of the road from where the young man, James, had started walking. The man was astounded to see that, as he turned the lady's eyes were open and there were no pupils in it. The man screamed and started running. When he reached home, his wife found that he was turning black.
“ Jack! What's happening to you? Is everything fine? You are turning black,” Terra asked.
“Save me Terra! Save me.... she will kill me....she will kill me....” Jack shouted. And eventually his neck twisted that resulted in his death.
“Jack, O! Jack, you can't leave me like this. I can't live without you. Jack! Open your eyes, Jack wake up,” cried Terra.
Suddenly the lights of the house started fusing. Now There was only dim light coming from the balcony's bulb. The windows and the doors began to open and close. Terra felt a burden on her shoulders.
“What's this?” Terra asked herself.
There was something very heavy on her shoulders. She was unable to move. As she saw her shadow on the wall, She observed there was another shadow on the wall. A woman was sitting on her shoulders. As she moved her head up to see her, she couldn't see anything. Eventually everything became normal and lights were back and the windows and doors stopped slamming. However, jack's dead body was missing. Terra started shivering.

The next morning she decided to leave the town for good.
“What's the matter, Terra? Why are you leaving this town? Where is Jack?” asked Aleena, her neighbor.
Terra told Aleena and others about that incident. But none of them believed in it. However, that haunted road was closed with hurdles. While leaving town, on the way, Terra happened to look at a big old banyan tree, located on abandoned road. Banyan tree was very large that's why it was clearly visible from Fantasma. She saw her husband's dead body on it. Soon the dead body vanished. She started screaming, crying, and left the town forever.

The years went on, and after about Three years, a man named James along with his wife Lara bought a house in that town. They were unaware of abandoned road. However, the property dealer who helped them in buying a house in that town was aware of each and everything. But he didn't tell them anything. And took great profit from them. In the beginning everything was normal. One day Lara uttered : “I think I should go to market today for purchasing some things.”
“As you wish dear,” said James. Lara left.
As Lara didn't know anything about abandoned road, so she decided to use a time saver road.
“I think, I should use a shortcut road to reach market easily and in less time,” said Lara on her way to market. As she reached at the road, She found few bushes that were placed there to close the road. She removed them to walk on that road. While she was walking through that road, she observed that the weather began to change, there was chill and freezing wind started blowing.
“What a terrible change in weather! I didn't expect such alter,” thought Lara. However, she continued the journey. In the middle of the road, she found a little rabbit. The rabbit was alluring.
“What a beautiful little fluffy rabbit!” said Lara.
She picked up the rabbit and moved on. Then she started feeling that the rabbit was getting heavier as she looked, she saw that the rabbit had turned into a huge terrible bear. She threw it and ran away. She was able to reach her house.
“Lara! Are you okay?” asked James. She told her husband about that incident. Then they started gathering information about that road. They wandered in the town, and at last reached an old man. An old man told them about the abandoned road and the incident that happened with Jack and Terra.
“Why these strange happenings occur on that road?” James asked. “Once there was a house on that road. An Old woman named Mathilda used to live in that house. She was very ill. She was childless and her husband had died. That house was her only property. The people of this town wanted to destroy that house so as to build a road there. As that place was suitable to build a road. However, the lady refused to leave that house. As she had no other house to live in. Cruel people of this town destroyed her house and built the road there. Mathilda was left on the road. She asked for the help. But nobody helped her and at last she died. Since then whoever travels on that road meets austere damage, therefore people have stopped travelling on that road and named it Abandoned Road.” said the old man.
“How can we get rid of Mathilda's spirit?” Lara asked the old man. “There is a way to get rid of her spirit but nobody has ever dared to do it,” The old man replied.
“What's that way?” James asked.
“That way is to find the corpse of that woman and bury it in the grave and offer apology to her. But the difficult thing is that, it is very hard to find her dead body. As she died many years ago,” said the old man.
“We will do it,”said James. Then James and Lara left. After their adieu, the old man disappeared.

The next day, James and Lara started searching for Mathilda's dead body. They searched a lot but couldn't find anything. Now it was evening and the darkness prevailed everywhere. James saw a glimpse of old woman standing with a banyan tree. As he saw vigilantly, he found there was nothing.
“James! James...” shouted Lara.
“What happened Lara?” asked James.
“I saw a body of a woman she had no head,” Lara cried.
“It may be just a phantasm,” said James.
Suddenly the wind started blowing and crows and dogs started making noise, however none of them was visible.
“What the hell is this!” terrified Lara cried.
James and Lara were both frightened. Then they heard a voice, “They killed me! They killed me!”
“We offer apology to you. You have taken your revenge by killing the people of Fantasma, now why don't you leave” James said.
Suddenly all voices and noises vanished. There was a complete silence and wind stopped blowing.
“I am in pain. Find my corpse under huge banyan tree and bury it hereby destroying this road so that no one can travel on this way again. Make my grave at this place where my house used to be so that my spirit will rest in peace.”
James and Lara did that and the evil spirit left.
“We did it! We did it!” exclaimed Lara.
The spirit left. People returned to the town, and no one ever went to that way again.

Interesting short story. Thanks for sharing your story on Storystar, Aleena.

Interesting short story. Thanks for sharing your story on Storystar, Aleena.

Well done writer, the style of writing is very impressive. Story is thoroughly worth reading. Choice of words is appropriate. Sublime content.

Well done writer, the style of writing is very impressive. Story is thoroughly worth reading. Choice of words is appropriate. Sublime content.

Very nice.loved it. It is one of the best short stories ,i have ever read. Well done miss aleena nawaz

Very nice.loved it. It is one of the best short stories ,i have ever read. Well done miss aleena nawaz

Loved it ,it is nice, do bad than have bad. Really liked the style of story, impressive.

Loved it ,it is nice, do bad than have bad. Really liked the style of story, impressive.