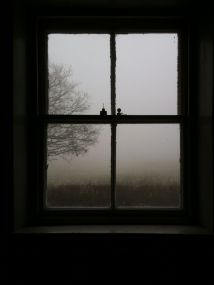 A sip of hot toddy brought a mild relaxing smile on Honshu’s face; grizzled and stout, he loved to spend the evenings, sitting on his rocker with his face dipped into a book. The wind outside was chilly; Honshu’s was one among the many small cottages, nestled in the lower mountains of the Skazac mountain range. Honshu noticed with corner of his eye that there was little toddy left in the cup; he stood up, wrapped in a checkered cotton shawl, and walked toward the windows to close them. Honshu loved the hills; he’d seen the world but he’d always returned to the hills. He liked the hills for they were soothing; but he loved them for the mysteries that lurked in the unknown corners of the obscure-scape, that they were.
Honshu looked outside; the blue spruces lining the road were swaying gently in the slow moving breeze. Occasionally a spotted cat would run across, but after three or four glimpses, even she disappeared in the silence. The hills in the distance were dozy; in their blue fur coats that was the sky. Honshu closed the windows and returned to the comfort of his rocker and to the delight of his book.

It was so vague that Honshu missed it at first, but by the second knock he knew someone was at the door. He walked tenderly and asked- “Who is it?”
There was no reply.
He walked closer to the door and repeated- “Hello? Is there anyone?” this time his question was met with a far-flung mew.
‘Silly cat’, he thought, picturing the spotted cat hitting his door, in search for a bowl of milk or a slice of fish. Honshu walked toward his kitchen to make another cup of hot toddy.
And someone knocked again.
This time, Honshu was sure it wasn’t the cat; for the knock sounded gruff and coming from someone, who was eager to get in.
“Who is it?” Honshu called.
There was yet no reply, but the faint tap told Honshu; something moved outside, near the door. He didn’t go too near the door; he called again, while staying away- “I’ll not open the door if you’ll not tell who you are!”
There was silence for another moment, then someone spoke from the other side- “Let me in. it’s too cold out here.”
The voice lacked all emotions but one; suffering. It was pale and dry, but it had grief; the person outside sounded as if he needed some warmth, as quickly as possible.
For a moment, Honshu felt like opening the door; but held his hand back and asked again-
“Sure; But, can you please tell me, who you are?”
There was silence again.
Honshu waited for a moment, when there was no reply; he decided that the man, whoever he was, had left. He wasn’t feeling good after the interaction, and felt it was best to go and make a cup of hot toddy.

The blue spruces were shedding dew as the gentle wind tickled them. Mew of the spotted cat would come to Honshu’s little cottage, time and again, carried along the breeze. The sweet smell of the oyster white toddy was in the air while the half read book, waited eagerly on a lonesome rocker.
Honshu, shivering a little, carried a cup of toddy as he walked toward his comfy rocker. He then picked his book and let out a sigh of relief as he tasted from his cup. He delved into the book and after he had read ten pages, he thought he heard a faint knock. Only this time it had come from behind; it’d come from the window. He didn’t turn. He put the book calmly on the table next to him and asked without looking-
“Who’s it?”
After a moment of stillness, a reply came in the form of a croaking knock.
Honshu, alarmed, turned. Nothing was visible outside the window; it was shrouded in a mournful mist. He walked closer; he knew, moments ago the window was clear. He put his hand softly on the glass and brought it down along the window leaving a gash in the swathe of mist.
He couldn’t see anything outside; the freshly wiped strip of mist had left the glass with marks of haze. He went closer, very close to the window; so close that he could see a faint reflection of himself in the glass.
He noticed the wrinkles first, then the pale lips; and before he startled, his eyes had met with the stone grey eyes of the face in his window.
It was an old face, abandoned by time; sad.
It said in a frail voice- “I want a shelter; they say they have no place for me in the graveyard”.

Creepy, yes JD you are right. It seems there is no room at the inn (graveyard )

Creepy, yes JD you are right. It seems there is no room at the inn (graveyard )

That was a suspenseful and thought provoking 'horror' story, Ayush. For whatever reason, it seems fitting for the current times in which we find ourselves, when so many of the elderly are dying (younger people too) that there is barely room for them all in the graveyards! What greater horror could there be than this! : (

That was a suspenseful and thought provoking 'horror' story, Ayush. For whatever reason, it seems fitting for the current times in which we find ourselves, when so many of the elderly are dying (younger people too) that there is barely room for them all in the graveyards! What greater horror could there be than this! : (

Happy Short Story STAR of the Week, Ayush! Thank you for sharing your short stories on Storystar! :-)