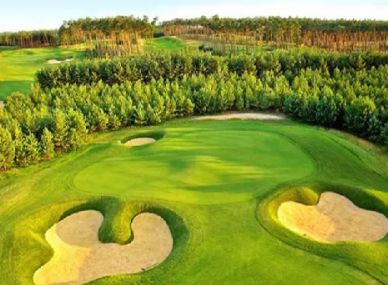 The Slobaviakinsky Golf Course and Convention Center was located in a small, undeveloped country called Slobaviakinsky, somewhere north of the 23rd Parallel. The golf course was funded by a United States grant as an entrepreneurial endeavor to improve the lives of the 1,673,489 citizens of Slobaviakinsky. The convention center employed 312 individuals, from grounds keepers to bartenders, to chefs and maids.

As it happened to be the biggest and finest golf course and convention center within 3000 miles, it was chosen to be the location of the annual European golf tournament. News of Tiger Woods’s attendance had spread far and wide, assuring the event would bring financial and national attention to the ‘not so thriving’ country. As a result, every room in the convention center hotel was reserved.

Wanting things “just as he liked it,” our boy, Tiger, had shipped his personal accouterments ahead of his arrival time. This included an all-electric golf cart with leather seats, titanium steering wheel, state-of-the-art sound system and beverage center, and his gold gilded golf clubs. The cart was now covered with a tarp and parked on the lawn beside the CEO’s office, lest anyone should attempt to pilfer same and sell it on e-Bay.

Unbeknownst to the tournament’s organizers, or anyone on the board of directors including the CEO, long before the golf course was built at this location, a secret society had created a maze of tunnels connecting the 1st through the 18th hole beneath the manicured grass. The secret society had held their covert operations in this location for years and did not want to risk discovery.
Discussions were underway beneath the turf, as to the best way to scuttle the impending tournament, lest the location of the secret tunnels be discovered and future doings of the participants thwarted. At last a plan of how best to wreck the event was voted on and passed.

Three days before the tournament, the CEO found his head landscaper waiting outside his office. The distraught man stood wringing his hands. He blurted out his story. During the night someone had torn out the sound system in Tiger’s golf cart. The leather seats were shredded. The golf bag holding his precious gold gilded clubs was slashed with marks that looked like the teeth of a wild animal. Knowing Tiger Woods’s erratic moods, the CEO feared that such a personal attack might result in his refusal to attend. In such a case, the tournament, itself, was in jeopardy.

Much to their surprise, Tiger grudgingly agreed to play with a standard golf cart if they promised to provide a cooler for his favorite beverages.

Two days before the tournament, the CEO found his head electrician awaiting his arrival. During the night someone had destroyed the wiring to the PA system, making it impossible to announce the events over the loudspeakers. Could the tournament proceed if Tiger’s adoring fans could not hear about his prowess on the field? Since the hotel was booked solid and news media from around the world were already on their way, the hotel management and staff were determined that every effort would be made to fix the system and save the tournament.

Upon hearing the news, the secret society called another emergency meeting. Scuttling Tiger’s golf cart hadn’t worked. Destroying the PA sound system hadn’t derailed the tournament plans. Drastic measures were needed. Another plan was suggested, voted upon, and passed. The timing of the plan had to be perfect.

One day before the tournament, the CEO found his head chef awaiting his arrival. Upon coming to work that morning, he found what appeared to be rat droppings all over the kitchen, on the stove and in the pantry. Bags of corn meal were torn open. The freezer had become unplugged during the night thawing hundreds of pounds of meat. He found the refrigerator’s electric cord torn in half. Obviously, the hotel had been invaded by rodents. With the health inspector due today, the kitchen would likely be shut down, again, putting the tournament in extreme jeopardy.

The clever CEO snapped his fingers. “Have the maintenance crew jimmy up barbecues on the patio with bricks and screens. We’ll BBQ all the meat for the hotel guest’s dinner tonight. Have the local markets and bakeries bring freshly baked bread, fresh fruit and pastry for breakfast tomorrow. We’ll bring all the portable microwaves from each room to prepare whatever else we need to feed the guests. Contact another dozen food trucks from around the county. They can serve the tournament guests tomorrow. We’ll make it work.”

In despair, the secret society gave up. None of their efforts had derailed the tournament. They would have to take their chances of discovery.

On tournament day, Tiger Woods faced the world’s top ten golfers. On the 17th hole, he was one stroke from winning the tournament. He eyed the ball, drew back his club and swung. His foot slipped on a leaf. His ball sailed into the air, then diverted to the left and landed in the trees next to the 18th hole. The crowd erupted in a collective moan. TV cameramen trailed him and his caddy into the woods. Tiger’s ball lay on the top of a mound of dirt, evidence of a major gopher hole.

Tiger stomped down the mound, creating a level surface, and smacked his ball onto the course where it slowly rolled across the green and plopped into the hole. Tiger turned to his caddy. “Better notify the CEO about this gopher hole. He should set out poison before they get onto the green.” He stepped onto the course to the adulation of his adoring fans.

In the tunnel below, a number of ground gophers cringed in trepidation. As they had feared, Tiger Woods’s attendance at the golf tournament had resulted in the discovery of their secret location. Their existence was doomed. It was only a matter of time until their secret tunnels would likely be destroyed. They held another emergency meeting, voted and passed a new plan. There was only one solution. They would move their network of tunnels next door into the International Culinary Institute the United States had recently built, intended to generate good will and educational opportunities to under-privileged Slobaviakinsky bakers.

Unbeknownst to the gophers, Wolfgang Puck was scheduled to hold his world renowned annual Cooking Show at the Culinary Institute next spring.

If you enjoyed this story, please check see my other stories on this site and check out my seven novels at Amazon available in paperback and ebook.

That was a really FUN story, Elaine! Thanks for all the great short stories you've shared on Storystar! :-)

That was a really FUN story, Elaine! Thanks for all the great short stories you've shared on Storystar! :-)

Congratulations on being selected as one of the Short Story STARS of the Week! : )

Congratulations on being selected as one of the Short Story STARS of the Week! : )