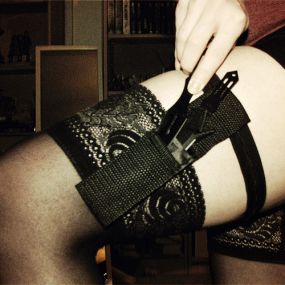 Dorothy hiked up her skirt and produced a knife. She inspected the blade and handed it to me as soon as it lived up to her scrutiny. The blade was still warm from proximity with her thigh and I felt a tingle in my belly. Dorothy arched an eyebrow and tilted her head slightly to indicate that I should get on with the job at hand. Anton Farquhar: the architect of his own demise, lay in the dirt surrounded by broken glass. I dropped down beside him and chuckled when I saw his tortured facial expression. ‘Come on then; get it done’ I thought. I squinted and deftly plunged the blade into his neck; it felt good to silence the bastard. Blood spurted all over my hand and all I could think of was how good it would be to clean the crap off my skin.

“For whom? My swathes of tiny children?”

“Forget it.” I wiped my hands, and the blade, on my dark jacket.

A giggly couple rounded the corner and we quickly made ourselves scarce. Screams ensued and I knew we’d have only a short while before the police were hailed. Dot drank deeply from a shiny hipflask as we ran; what a character. We disappeared into the shadows beneath the huge oak—as per usual—and I leaned in to kiss the love of my life. Dot recoiled and lit a cigarette.

“Try and be more professional, Darling.” She brushed lint from my shoulder before adjusting her black stockings. Even though it was hackneyed as all get-out, I loved the whole French maid thing she had going on; it really stoked my fire. She offered me a smoke and I declined. Sirens howled and a commotion began to swell in front of the house. I peered out from the safety of the foliage and Dot rolled her eyes; I didn’t need to look at the woman to know her reaction. We’d been doing the same thing for years: a pair of cold-blooded killers through and through. I knew her better than I knew my wife and children.

“Won’t be long. We’ll be sipping Chateau D'Yquem by the fire within the hour.”

Dot sighed. “So, you’re assuming that you’re coming back to mine, then?”

“Rot. The giveaway here is that you, Edward, do not have a home with a hearth... Or space or character.”

“Anni— You are joking, darling. What are we to celebrate? Three years of awkward poking in the staff water closet?”

“Please. Don’t be crass. I care more deeply for you than anyone on earth.”

“Your wife will be thrilled.”

“Margaret doesn’t feel much of anything anymore. Not for me, at least.”

“Quitting a management position to pursue the arts will evoke that kind of thing from the female sex.”

“Not exactly the arts, what we do, is it, though?”

“What would you call it, Eddie?” Dot waved at me then snapped her fingers when her patience grew thin. I finally ascertained that she wanted me to hand her the knife. “Look at this thing. Each weekend we kill; over and over, we murder and then run until we’re discovered and some clever clogs can put all the bloody clues together like a cut-price Sherlock bleeding Holmes.”

“And? It’s a massive prick-tease. At first, it was thrilling and, yes, maybe that’s what made me so hungry for a little stabbing of my own.”

Dot played with the stage-knife: tossing it up and catching it, caressing the steel and then kissing its mirrored surface. “Got a spare blood-pouch?”

“What on earth for?” She leaned close and whispered into my ear, knowing that the sensation of her warm breath on my skin would render me unable to protest.

The crowd caught up with us as Dorothy had foretold and we played our parts impeccably as always. When the time for the clever-dick's summation of the crime came, Dot winked at me and I steeled myself for what was to come. The winner of the night was a slight woman of thirty years wearing thick glasses. As she self-consciously addressed the rest of the group in a near whisper, Dottie sprang into action.

“Do you think I’m just going to stand here and take this slur upon my good name? I’ve worked for the Farquhar family for thirteen long years and this will not stand!” The bespectacled woman looked pleadingly at the other players as Dot grabbed me and placed the retractable knife to my throat. In my head, I worded my explanation to Margaret as to why the syrupy fake-blood ended up all over my collar on this particular night. “My life has become stale and I don’t want to do this a moment longer. Have none of you ever done a job you’ve absolutely loathed? I’m tired of being an appendage: trapped in bloody drudgery like bloody Sisyphus! This man and I were lovers once. He’s not a good man, however, and therefore I sentence him to die before you all tonight. Consider him a sacrificial payment... And with this payment, I purchase my emancipation!”

The crowd gasped as Dot plunged the blade into my neck. I whimpered when I felt the knife, not slide back into the handle as it was meant to, but actually penetrate my flesh. I fell to the ground as a font of blood sprayed Dot’s pretty face. They still hunt for her and I await a visit from you, my dear Margaret and the children. Maybe you don’t want to see my fearsome neck scar or maybe you think I really meant to kill Don Tilbury, a.k.a. Anton Farquhar. I hope this letter finds you well and that you’ll think better of me one day.

Thank you, Gail. As Peter Sellers would often say on The Goon Show: I'm a "silly, twisted boy" :)

Thank you, Gail. As Peter Sellers would often say on The Goon Show: I'm a "silly, twisted boy" :)

I am with Jd on this one. Twisty is the right word. Your nightmares must be frightening indeed! LOL

I am with Jd on this one. Twisty is the right word. Your nightmares must be frightening indeed! LOL

Thanks, Kevin. My nightmares are quite intense (but very enjoyable)
:)

Thanks, Kevin. My nightmares are quite intense (but very enjoyable)
:)

It started out a bit nasty, but then became an entertaining read with a few twists that kept the reader guessing. Well done.
Thanks for all the outstanding short stories you've shared on Storystar, Jason! :-)

It started out a bit nasty, but then became an entertaining read with a few twists that kept the reader guessing. Well done.
Thanks for all the outstanding short stories you've shared on Storystar, Jason! :-)

Thanks for your comments, Jd (you know I like things twisty).
Thank you for providing a place for us all to exchange ideas and seek inspiration and encouragement; it means a lot. : )

Thanks for your comments, Jd (you know I like things twisty).
Thank you for providing a place for us all to exchange ideas and seek inspiration and encouragement; it means a lot. : )