My life in Twenty years

Bring!!! My electric alarm clock made a high pitched sound. I got out of bed and went down stairs. My robotic chief was there waiting with a plate of scrambled eggs. I ate my food and turned on the TV. “Welcome back to live TV” said Clarky Martson, a robotic news reporter. After I finished breakfast I got into my space shuttle and took off. The air traffic was not as large as usual. I was getting sleepy and soon I fell asleep. Now, you may be asking what if you crash. It is alright everyone has robotic legs just in case. I arrived at a building and got onto my miniature rover and went in. This building was called Mars scientist lab. And yes we have colonized Mars. I went in and saw my friend. He was called Jonex, he was a martian that had very bright eyes. I grabbed a test tube and got some liquid nitrogen and some martian liquid. I told Jonex to set up my table for me. I went to my room and sat down. I grabbed a can of levitating gas and placed it on my table. I pressed a button and my table went higher. Suddenly a red flash appeared. I was almost out of levitating air. I charged it up and got right to work. First I put some Martian liquid in then I added the liquid nitrogen. BOOM!!! The potion exploded in my face. I got some water and put out the fire. After hours of hard work I finally found the right way. First you have to put some hot lava, then put the ingredients. I went outside and I climbed into my space shuttle and took off towards home. When I arrived home, my robotic bulldog was waiting there. I gave him a treat and followed him inside. My robot chef was waiting there with some pasta. “thanks” I said and started to eat. After I finished, I turned on the TV. “Welcome to the universal News!” said Snap Larson, a news reporter. “On Mars today it will have some scorching hot temperatures.” I grabbed a soda and sat down. Man, was I tired! After the show I climbed into my pajamas and plopped down on the bed. And finally a good night's sleep…..

That was an entertaining vision of life in the future. I especially like the cool picture you drew to go with your story. Thanks for sharing your short story for kids and your original art illustration on Storystar, Nicholas! :-)

That was an entertaining vision of life in the future. I especially like the cool picture you drew to go with your story. Thanks for sharing your short story for kids and your original art illustration on Storystar, Nicholas! :-) 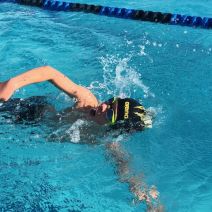