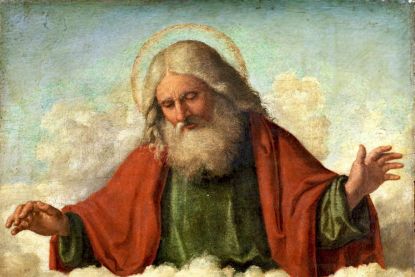 A deity or god is a supernatural being considered divine or sacred. The Oxford Dictionary of English defines deity as "a god or goddess", or anything revered as divine.


In monotheistic thought, God is conceived of as the Supreme Being, creator deity, and principal object of faith. God is usually conceived as being omniscient (all-knowing), omnipotent (all-powerful), omnipresent (all-present) and as having an eternal and necessary existence. These attributes are used either in way of analogy or are taken literally.


Arguments about the existence of God typically include empirical, deductive, and inductive types. Different views include that: "God does not exist" (strong atheism); "God almost certainly does not exist" (de facto atheism); "no one knows whether God exists" (agnosticism); "God exists, but this cannot be proven or disproven" (de facto theism); and that "God exists and this can be proven" (strong theism).

“I think the universe was spontaneously created out of nothing, according to the laws of science”

“Thus, if any of you do not believe in your lord, you will be extremely punished and tormented. Those are the ones who have lost everything”


Aaliyah was once a Christian. Now she has transferred her faith into Islam. She is a proud Muslim. Her love of god erupted at the age of five. She wears her lavender head scarf on god’s request. Becoming a Muslim has been the best decision she has ever made! In Islam, the Quran is a broader, in depth history to the religion. The Quran has got many scriptures, proof of god’s existence by god’s saints, angels and messengers.


Aaliyah has a big heart. She has helped raise multiple money and supplies to Africa. She reads the Quran every single day. She prays five times a day and salutes god. She fasts and has joined several charities for Muslim’s and Christians. She believes humans are servants, siblings and children of god. (According to the Quran)


Aaliyah has met many new people, different faces every day. Her moral of life is to worship and have faith in god till her death. She has always tried to convey bad people who are in the wrong direction. She has met many people who deny god, disbelievers and atheists. Although, she has successfully delivered non-believers on the right track. However, she failed with atheists. Because, some people just never change. Therefore, god said- “The moment of their death will be extremely hard” because god is strict on bad people.


Aaliyah has a lot of proof of god’s identity in life. She believes god is everywhere. But people just don’t see it. In fact they want to conceal it without repentance. Aaliyah was communicating with a sinful person; he was saying disrespectful words about god. After that ridiculous speech, he began to cough scarcely….. Aaliyah reassured him and said this was a punishment from god so he thought about it and decided that she was right and thanked her.


Furthermore, someone deferred praying. When that person passed, a snake smuggled into his grave.
Along with, someone burnt the Quran, crashed it with his/her feet and set it on fire….. He/she’s punishment was turning into a snake-like creature.
Together with, a house was burned down apart from the Quran. It was kept in a safe position. Not even a pinch of burnt was seen.
These incidents have all been seen, heard and eye witnessed by Aaliyah.
“So tell me, are you still going to disapprove god?” Aaliyah seriously says.