Gordon shifted his Hodaka Super Rat 100 cc motocross bike into third gear, wrapped his throttle wide open, and flew off the bank of a creek right behind his best friend, Steve Craig, on an identical Super Rat. Gordon knew Steve cautiously slowed down on jumps. He thought, I gotcha now, as his engine maxed out at 10,000 rpm. Gordon flew over Steve's head at thirty miles per hour. Fifteen feet later, he landed in the bottom of the dry creek, a scant distance ahead of Steve on the narrow dirt track. When the wildly spinning knobby back wheel hit the ground and bit in, the front wheel tried to lift up and flip Gordon onto his back violently. He leaned over the handlebars and held the front wheel to a two-foot high rise in a high-speed wheelie. Gordon leaned left to cut Steve off and take command of the rut in the bottom of the creek. A split second later, they crossed the wide creek bed and flew up the opposite bank. Gordon shifted into third gear to accelerate up the hill. After he reached the top of the bank, he continued rising to five feet in the air, extending his lead over Steve. Now he closely trailed Billie's 125 cc Hodaka Combat Wombat. With a shift into fifth gear without the clutch at full throttle, Gordon's Super Rat jumped closer to the Wombat as they entered a long, sweeping curve. All three bikes screamed insanely loud through modified straight pipes with only token mufflers built to for maximum speed. Only the helmets kept the sound of the bikes to a bearable level.

They were in north Dallas on the Rabbit Run motocross course full of creeks, woods, and trails. They were practicing for a big Fourth of July race in Garland with a fifty dollar first prize, big bucks for eighteen-year-olds in 1972. The reckless, invincible racers had been at it neck and neck for the last hour. The hot July sun drenched them with sweat, and the dry, dusty track blackened their teeth.
Billie kept a small lead on his bigger bike through an empty straightaway. Gordon stayed right on his tail, with Steve just inches behind him. Gordon was at full throttle in fifth gear at fifty miles per hour when Billie slowed for a curve to the left. Gordon inched past Billie on the outside, leaning to the left to cut Billie off and maintain power in a slide through the long sweeping curve. Gordon stepped down hard on his foot brake at the last second.
That’s when his brake cable broke.
Gordon silently screamed, knowing he would not make the turn. Without his brake, he slid straight ahead toward a blur of green trees on the right side of the curve. If he backed off his throttle, he would lose control of the slide and flip over into a deadly wreck.
Going into a slow-motion death sequence, he flashed, HEERREE COOMMESS the FIIRRSTT RROWW of TRREESS. Whack, whack, whack. His sideways sliding bike slowed down to thirty mph as it mowed down small saplings.
Big trees came up fast. Gordon straightened up and aimed straight ahead, downshifting to get back on the power curve. This blur of events happened in a flash as his reflexes and muscle memory took over.

All Steve and Billie knew was that Gordon passed them, but when he threw his bike into a slide, he didn’t slow down; he went straight ahead into the woods. They stopped their bikes and ran back to the woods. They followed a path of torn up brush and dirt through a cluster of two-foot diameter oak trees. Breaking through the oaks, they couldn’t see Gordon; but the scream of his engine told them they were near. Ten more yards and the trail of broken trees and brush disappeared into the bottom of a creek. Gordon had fallen off the creek bank into shallow water with his bike on top of him. The motor still screamed at full throttle. He lay there dazed until Steve ran up, turned off the engine, and pulled the bike off of him.
Steve asked incredulously, “Are you okay?”
Gordon shook his head to clear the cobwebs and muttered, “I think so. Damn brake cable broke. I didn’t think I was going to make it through all those trees.”
“You picked a heck of a way to cool off,” Billie chided.
Billie and Steve drug the bike out of the creek. They walked it back along the newly created path through the trees while Gordon staggered behind them. They stopped when the three-foot-wide handlebars wouldn't pass through a narrow gap between two large oak trees. Steve looked back at Gordon incredulously.
“How did you get your bike through these trees?”
Gordon paused to reconstruct the blur of the last few minutes.
"Piece of cake. When I saw the big trees dead ahead, I straightened out of the slide to face forward. Right before I hit the trees, I aimed at a gap, popped a wheelie, and turned the handlebars ninety degrees to clear the trees with just inches to spare on each side. After I passed through the trees, I brought the wheelie down, but still had no brakes. The saplings slapped my handlebars until I slowed down. Like to broke my hands. Then I fell into the creek. I can’t believe I made it; I should have hit a tree and killed myself.”
“You got that right,” said Steve. “That was incredible riding.”
“How does my bike look?”
“Other than no brakes, your handlebars are bent a little. You'll be able to drive home. Gordon, you're one lucky son of a bitch."
“I know, I just used another one of my nine lives. Let’s go home, boys. I’ve had all the fun I can stand for one day. We’ll come back tomorrow and practice again. I have a brake cable to fix.”
Steve laughed. “I’ll beat you tomorrow.” 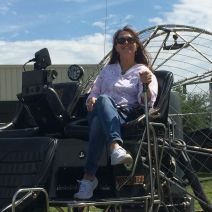 Whew!!! It could of been much worse! Glad you had great bike skills to get you through the trees!

Whew!!! It could of been much worse! Glad you had great bike skills to get you through the trees!

That's some crazy riding, Gordon! How many of those 9 lives of yours have you used now? My guess is more of them than 9! I'm glad you're still here... having lived to tell the tales of your brushes with death! Thanks, Gordon! :-)

That's some crazy riding, Gordon! How many of those 9 lives of yours have you used now? My guess is more of them than 9! I'm glad you're still here... having lived to tell the tales of your brushes with death! Thanks, Gordon! :-)