Somewhere in the corner of our earth, deep inside a forest,
I don't know which.
They say there's an old wooden house,
In which dwells an evil witch.

In the garden plants are rare,
And the ground is generally bare.

If you look through the window glass,
You'll see broken and rusted things,
and some dry dead grass.

If you bring your pets such as dogs, cats or rats;
Then they'll definitely run away after you open the door,
As you'll be greeted with a lot of bats.

Once you get inside,
There's nowhere you can hide.

It doesn't matter if the wind is calm or it blows,
Because before you turn around, the door will automatically close.

If you shout, then you're out,
If you crouch then you'll say 'Ouch!';
As lying on the floor, are thorns as sharp as needles,
Which will bite you more than any beetles.

No one will hear your shrieks and pains,
As there will be no creatures with brains.

Carefully climb the fragile stairs,
Because if they broke, you'll fall on your hairs.

Once you are on the upper floor,
Everything will fall silent and dark.
Really so silent, you'll not even hear a dog's bark.

In the corner of your eye,
You'll see something creeping on the ground.
But there'll be nothing there,
When you check and turn around.

There will be a huge sea,
Of 'killer honey bee.'
The strong ones will be in the front,
And behind will be the ones, who're half burnt.

They will sprint like a lightning towards you,
Now there's just one thing you can do.
You  have to open the door right beside you,
And get inside closing it before anything, the bees will do.

If you survive, then you'll live,
But don't be so glad, as the thing will soon become bad.

The room will be totally dark,
And there will be bones of fishes like shark.

Beside you there will be a 'Golden Book',
And in front there'll be a mirror in which you've to look.

In the mirror when you look through,
You'll see someone sleeping beside you.
It's Mr. Skeleton lying on his bed,
Before you turn around, you're already dead!

Sacred crosses or holy mantras don't work there,
As in the 'Golden Book' it's clearly written, "God Ends Here!'

Now if anyone comes there to take a round,
Your body will be nowhere to be found.

The silence will again spread,
And anything will not be heard in the whole city.
Only your spirit will listen to the sweet laughter of death,
That too, for eternity... 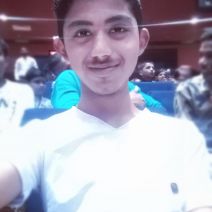 Thanks. I am glad that you liked it.

Thanks. I am glad that you liked it.