I will always wait and never leave you 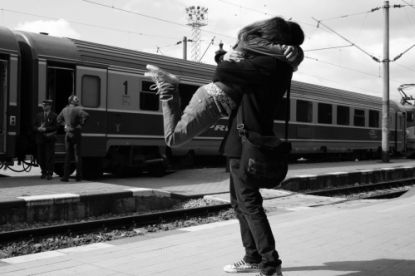 
Thick layered mist falls down in this winter season in January, 1930, at Paris, France, a century where love doesn’t trade with money, sex, material costs or supplies. People in this year loved more deeply because there was more free time for love. It is known that in the 1970’s and 1980’s people had the time of their lives! It was the most beloved and dearest years for people as they say.


Dmitry McDonald and Isabella Stewart were born and raised in France. However, Dmitry is from a Greek origin; Isabella is French. They have been a romantic couple for over five years! It’s a complicated one and unclear to perceive. They are having the most furious, spicy and saucy fight of all! They have crossed the line over too much now!


Dmitry is always jealous of Isabella when she talks to her best boyfriends. He envies the littlest details! For the reason that, he loves her so much. But not half of how much Isabella loves him! Dmitry has pride thus; Isabella is always the one who is upfront to say sorry first.


Bewilderedly and perplexedly, their zodiac signs are: Capricorn- earth sign and Aries- fire sign. Flammable, despairing, the attraction, that connection, the powerful love they endeavor is so true, it hurts sometimes. The fury they possess, although, that sweet satisfying affection is divine beauty! That being said, one thing is certainly clear, the love they share with each other, regardless of, the fights.


“I’m so tired of all our fights, our fake compromises; you’re just too sensitive for me! I don’t want you wearing short skirts when you go out! I don’t want you seeing that guy ever again!” Dmitry directs Isabella.
“What’s wrong with my dressing? Sweetheart, we live in the nineteenth century not fifteenth century! And I told you his just my friend, nothing less” Isabella defends.
“Oh don’t you understand? I’m just so jealous of you! But I know and don’t trust that guy’s intentions, my instincts are telling me, he is not close with you in a friendly way”
“You can’t decide who I can, or cannot see! I live my life my way and never depend on anyone!” Isabella shouts.
“Fine that’s it! Then you can live without me!”
“What? What does that mean?”
“I’m leaving you; I’m breaking up with you, I’m going to Greece”
Dmitry disappears and bangs the door shut.


Isabella is crashed down on the floor with agony and begins to cry. Dmitry is gone. It’s like a sharp pain, a knife stabbing her heart. She’s crying so awfully loud. She spends the next few hours crying and processing her words that left from her mouth to Dmitry. Damn. She regrets every word that she said! She has decided that, she cannot live without him. It’s been five years. Five damn years!


She tugs on her long iron jacket, slips on her long leather boots with four inch heels and runs after her long, lost, love!


She goes to Gare du Nord train station. It’s a Friday so it’s a peak hour now. Fully packed with French people. She climbs the stairs, enters inside the linen building; it’s great in size and built old, established in 1866. The background sounds are buzzing and humming. So many people walking up and down the station, other couples kissing goodbyes, children screaming in their prams, the chilly but humid air making her feel breathless. She walks and walks to find her lost love.


And there he is.
Looking in such untidiness, he is drunken, wet, with tears in his eyes, holding his sepia suitcase in one hand.
Isabella promptly runs up to him!


“Dmitry!” she yells and hugs him so stiffly.
“I’m so sorry! Where are you going? Leaving me!” she asks weeping, crying loudly and gasping for air.
He is withholding, he just returns her hug.
“I would never walk out of you, look I’m here please don’t go, let’s start from scratch”
The vibe is so dark and dull. The sky is turning downward to a dirty trout color, depressing but relaxing and cool.
“Okay I won’t leave you, I’m not going okay?” He confides.
“I love you so much” Isabella says.
“I love you too” Dmitry replies.
Isabella is in bliss now.


The sound of the rain is so outrageous. They’re now standing at the Gare du Nord train station whilst people walk past them, but metaphorically, only the two of them performing on the stage, pressed on each other, down to their sex. Isabella crying in Dmitry’s arms, both head over heels in love, and soaked up. Dmitry’s scheduled train has already departed. Thus, now to be terminated. Thus, he hasn’t gone, and he won’t. How can two couples leave when they love each other so much? Thanks to Isabella’s strength to halt him. Maybe she loves him more……