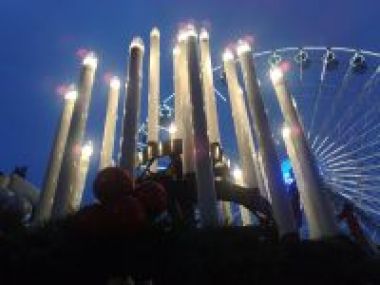 It was a cold day in the tiny village of Dunkirk. Villagers going about their business was often the case until one day an old face from the past had suddenly turned up.

No one knew except for one person, Mr. Smith. A rich wealthy businessman who had for many years held a terrible secret, a secret until this day no one knew.

The stranger, known as Mrs. X, made her way to the house of Mr. Smith.

Knocking on the big iron door that overlooked the beautiful outlining countryside and flourishing river, Mr. Smith had opened the door.

"What brings you here chere madam." He said

As they made their way from the hallway into the large living room, Mr. Smith began to feel uneasy about what he was suddenly faced with.

"Would you like a cup of tea." He suggested.

"Yes that would be nice."

As he made his way into the kitchen it gave him pause for thought. He knew that the villages would be now gossiping about Mrs. X's comeback. He never imagined in a million years that she would be back to haunt him.

Mr. Smith had already paid her a sum of £5 million to keep her quiet but obviously this sum was not enough.

The kettle now whistling woke him up from his thoughts. He quickly and precisely poured the water into the cups where the teabag was waiting and made his way into the living room where she was waiting for him.

"Well I'm not going to beat about the bush, I know that already the gossipers in the village will be talking about me but I am refusing to hide any longer. It was your fault what happened, you were the cause of it all."

Then a large silence had fallen between them.

"What do you mean?" He asked very sternly, "If I remember it was your idea in the first place, it was you that wanted her dead. She was my wife and because I was besotted in you I did everything you asked of me just to keep you and our future child that you were carrying at the time happy. I wanted us to be a family. Then after you had killed her you took our child that you were still carrying and left. It was me who had to pick up the pieces and bury her into the river behind the house and explain to the villagers that she had left with another man."

Whilst Mr. Smith recounted this all, little did he know that waiting outside and listening in was Mrs. X's detective boyfriend who had hid a microphone into her bag.

"You're lying, you had killed her and had thrown the body into the river. The money that you gave me was to bring up my child. I was never pregnant with your child, it was never yours, it was my ex boyfriends child. I've come to reveal the truth that you are the evil manipulative man who paid all your life, getting out of trouble, that it's now finished, mon amie."

"How much do you want?" He said spitefully

"I don't want anything. I want the truth to be known, that is all. Outside I have my new boyfriend waiting in his car, happy to meet you."

"What have you planned?"

"Nothing," she replied, "just your downfall."

Mr. Smith began to laugh, he couldn't believe what he was hearing, and then he stopped. He began to think how he could get out of this hole that this woman was saying. He believed for 18 years that he was a father and not a day went by when he had not thought about her and the child.

He was shocked by her appearance and shocked he was never a father to her child. He was used and abused and worst of all he had killed his wife. For years he tried to block out that fatefull day.

Sarah had came home from work.

"Hello love." she said enthusiastically to her charming husband.

Mr. Smith, not saying a word, was ready to pounce on her like a cat after a mouse.

"A glass of wine darling."

"Thank you love, I'll just get changed into something more relaxing."

Whilst Sarah went to get changed, Mr. Smith had managed to open a bottle of Bordeaux Savingon, her favourite white wine, and then slipped in the poison that he had bought from the local farmer to kill rats.

Sarah, now ready, began to take the glass of wine from her husband and toasted their future. Until suddenly she began to froth at the mouth and became unconscious.

Mr. Smith, doing nothing to help her, stood still waiting for her to die. It was a perfect crime, he thought to himself, as he could see his wife suffering. He didn't care, for all he could care about was Mrs. X and their supposed child.

"I told you I am here to get you to tell the truth."

"Never" He shouted and then lunged towards her trying to throttle her with his bare hands.

But Mrs. X quickly ran out of the house. The detective boyfriend was there ready to help her into the car, before speeding away to the police station in the village.

It was then the villagers of Dunkirk realised what had happened. They couldn't believe it. It was impossible to imagine that Mr. Smith was responsible for the death of his wife and the bad luck that he had brought the village.

Mr. Smith, now arrested for the murder of his wife, soon left the village. Mrs. X had managed to take over the property, as at the time of her sons birth she put down Mr. Smith as the father. It was now legally his.

Mr. Smith never came back to the village again.

The village never became the same again after the secret that had been kept a secret for over 18 years had finally come out. It was the end of village life as they had known it. Until the next secret came out to attack the village residents again....