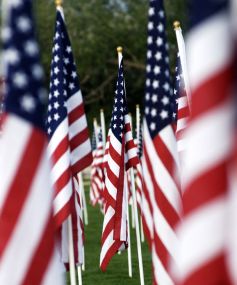 There was the knock at the door we had all been waiting for. I had been in the middle of my lecture about being nice and respectful when the knock came. There was a mad rush for the door as eight pairs of feet scrambled to get to the door first. The door flew open and the room grew silent as the man of the hour stepped across the threshold. It was my friend John Power smiling at each child as he pushed his walker into the room. We had been baking for soldiers overseas and the girls worried if their presents would find real soldiers so far away. John had come to tell his story. We had been waiting for days to see this genuine soldier! As I ushered him to a chair you would have thought he was the Pied Piper. The children fell at his feet and could not take their eyes off him. At first, the kids just stared at him and the ribbons and pins on his VFW hat. Then, as he uttered, "Thank you for inviting me here today"- the sound barrier was nearly broken when the mesmerized children broke their silence, "John Power are you still a soldier? Did the Taliban hurt you? Are those real medals on your hat? John Power!."

He smiled at the children, held up a hand and said, "Now I have answers to all your questions, but first I just have to know, is it true that all these presents are for soldiers overseas?" The din rose again when three girls, sounding like ten, said, "John Power, this box is going to sailors and marines and this one is going to an army soldier.John Power, do you like cookies too?" John Power's smile lit the room as he said, "Oh every soldier loves cookies from home". He smiled again as he arranged his hat on his knee and said, "I am so proud of you for doing this. Did you know I was a soldier once a long time ago? I served in a war called Vietnam. I wanted to be a good soldier, but it wasn't always easy to be brave. It was always dirty, smelly and hot there, even when it rained. I spent a lot of time trying not to think about my family and home. Sometimes soldiers would miss their families so much they would even share their mail with each other just to have something else to read or dream about. One night while we were on patrol I was wounded. They took me in a helicopter to a hospital in a place called Danang. Some days I had so much pain and felt so lonely I would hide my face and cry into my pillow. A fellow came along and handed out medals." He showed us his hat covered with many ribbons, a V, and other decorations I did not recognize.

As he spoke, a small hand hesitantly reached up to him and he extended his hat saying that it was alright to touch it. Instead, the tiny hand reached out to touch his knee and as he looked into the eyes of my young daughter, he realized the touch was for him and she said, "I am glad you are ok John Power." With a smile and a wink John went on with his story, "The next day someone came around handing out mail and I prayed for mail. The prayers worked! I got some letters from my family and a crunched up dented shoebox that looked as if it had traveled the world twice already. I did not recognize the return address, but I really didn't care, as long as it had come from home. I ripped it open and found the most beautiful letter I may have ever seen. It was from a little girl who had drawn my name from a hat at her church. I could not believe that someone so far from my hospital bed would make cookies for a lonely soldier. She said she was very proud of me and hoped I would come home soon. I still have that letter, but I don't still have those cookies! They were hard like rocks and six weeks old but they were the best cookies I have ever eaten. I got myself a big cup of hot chocolate and I ate each and every crumb."

John sat back for a moment with a look of pure joy in his eyes and smiled again. The children, still at his feet, sat staring at him as if he were Superman or Gandhi or their favorite rock star. Maybe he was all of those things in just that one moment of their lives. He sat forward and said, "If you are worried that soldiers might not like your cookies, they will! If you are worried they won't like your letters, oh I promise they will. Some might even keep them in their wallet for the thirty years. I want you to know, if you think you can't make a difference, don't worry about that children. You already have. You have touched an old soldier's heart and I know you will touch the hearts of young ones too."

When it was time for John to go, the children followed him to the door. He turned and thanked them again for being so kind to soldiers so far away from home. As the house grew silent, the girls turned to me and asked if we could make more cookies. They each rolled out and baked star and tree cookies. Then each girl frosted and sprinkled until there was a small box full. It turns out these cookies were for John Power, a hero in his own right.