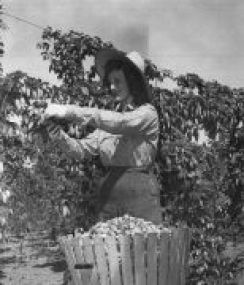 Camouflaged amongst the leaves, a battle waged; two combatants, four gossamer wings fighting to the death; the price to the loser. As the silent war waged on, the female Praying Mantis lost her grip on her mate and fell. She landed on the blanket where a toddler lay sleeping in the shade beneath wires hung heavy with hops.

Not far away, the mother and her friends picked hops from twelve feet high wires and dropped them into long cloth bags they carried on their shoulders. As the morning progressed, more of the stripped vines would lay barren and trampled in the pathway.

Mary halted her work and checked her watch. She dropped her bag and ran to the blanket where her toddler lay sleeping in the shade. Heedless of the outcome of the recent battle overhead, Mary flicked the Praying Mantis from the blanket, opened a basket and removed a diaper. Careful not to wake the baby, she changed her wet diaper, neatly folded in three, then pulled up her coveralls and buckled the straps.

The attack on Pearl Harbor and her husband’s enlistment forced her to the fields to supplement his military check for dependents. She only agreed to pick hops because she could bring the toddler to the field while the two older children attended school. After school, her daughter took the baby home.

Mary covered the child with a light blanket and checked the direction of the sun. In an hour, she would move her to another shady place closer to the women. Mary placed a toy horse next to the sleeping baby, kissed her forehead and ran back through the tangle of vines to her half-filled cloth bag.

Her companions had moved somewhat ahead, leaving her alone in the center of the field. She pulled the headscarf from her head and wiped her brow, retied it quickly and refastened the heavy bag to her shoulder. She would need to work into her lunch break to catch up with her friends in the next rows.

Giggles and whispers echoed through the leaves, exaggerated tales bearing only the faintest resemblance to real romantic encounters. Then, peals of laughter, as the girl’s stories became more and more provocative.

Soon, she would drag her bag to the weighing station where the foreman recorded its weight beside her name. The numbers were totaled at the end of the week and a few cents per pound paid for the week’s back-breaking work.

The smell of stale cigarettes warned of the foreman's approach. "You’ll have to keep up with the others.” He talked around the stub of the cigarette, puffs of smoke spewing out every couple of words. “If that baby’s gonna’ make you fall behind, you won’t be able to bring her out here.”

"You know we’re on a time frame. We’ve only got three more weeks of picking time before the hops start to rot. If you can’t keep up, I’ll have to get someone who can. But I’m shorthanded since Lilly’s gone, so I’ll let it go today. Work faster, will ya'?” He tossed the cigarette down and ground it into the tangle of vines with the ball of his foot.

Mary turned to her task and pulled hops from the vine hanging above her head and stuffed them into the sack. The other girls didn’t have to stop every twenty minutes to run and check on a baby, brought by necessity to a dirty field for lack of a caregiver. She was working as fast as she could under the circumstances.

When all the hops within reach were stripped, she pulled on the vine. It tumbled down into the pathway. She leaned to glean the hops from the ground and pain ripped through her back and shoulder, a daily occurrence for the past week or so. She gritted her teeth through the pain. This was for the children.

She hated bringing the baby to the field. Often, when she returned to check on her, she’d find her gone. Sometimes it would take five or ten minutes to find the wandering child. Once, the baby had followed the tractors from the weighing station to the loading trucks, bound for the factory to be made into beer. What could have happened, almost made her quit the job. But the money was too tempting. If she worked hard, she could earn $25 a week.

The $150 she could earn during the six-week picking season would come in handy this winter when no seasonal work was available.

If the baby caused any more problems, she might need to keep her daughter home from school to baby-sit the remaining three weeks. These days, with men off to war, women did what was necessary to survive.

Wilson said, ‘since Lilly’s gone, I’ll let it go today’. So Lilly’s misfortune was her gain…

Lilly; the first woman to welcome her to the field. Most of the others were conceited, silly girls. They didn’t have husbands who might not return from war, or children to feed and care for.

Lilly had understood. A middle-aged oriental woman, she also had several small children. Her family owned the local grocery store. After the United States entered the war, the country worried what to do with Japanese-American citizens. Many had lived in the United States for several generations. Lilly and her husband thought their ties to the community, owning their own home and having a business would protect them, but it hadn’t.

Yesterday afternoon, several military men came and forced Lilly into their truck. The women and Wilson rushed to intervene, shouting and arguing that she was no threat to our country, but to no avail. The men explained that she and her family would be taken to an internment camp, to keep them safe until the war ended. Lilly’s place in the community and US citizenship could not compete with her nationality or war-time racial tension.

“What will become of her home and her business? Will the children be able to go to school? What is an internment camp? When can she come home? Why would the United States do this to its own citizens?” Wilson had shrugged. He had no answers to the women’s questions. They had returned to work with heavy hearts.

So, Lilly was gone and Mary’s job in the field was secure for the time being. She hardened her heart to Lilly’s plight and faced her own difficulties. For the next several weeks she would work hard and save her money. When hop season ended, surely, something would turn up. It had to.

Her dependent’s check and ration stamps would get them through this winter. Next spring, she would plant a victory garden. Her son would collect items for the rubber and metal drives with the other boys. They would buy a War Bond next month. She would knit socks for the boys overseas with the Ladies’ Auxiliary and contribute to the rag drive. She would serve coffee at the USO once a month.

Next year, she could pick beans, berries, and apples and then, in the spring, rows of new hops would grow, twisting round the wires, reaching skyward toward the nourishing sun and rain until they blossomed and produced fruit. Then would come the harvest and the cycle would begin again. Perhaps next summer the war would end and Ed would come home. Somehow, someway, she would endure.

She heard the wail of a baby at the other end of the field. She took the bag from her shoulder and walked back to tend the child. The baby’s blanket lay just beyond the next pole.

The female Praying Mantis lifted her head from the trampled vines. All was quiet except for the crunch of the approaching woman’s feet. The mantis rose to her hind legs and defiantly waved her antenna toward the unknown danger. Her home was yanked down, thrown to the ground, trampled and ground into the earth, and ripped asunder by human hands. Powerless to stop the destruction, she sat within the ruins, small and defenseless compared to the giant approaching, yet she waved her antenna in defiance, ready to fight to the death to protect the unborn she carried within.

She would not give in to the madness that was once her peaceful world. She would endure. She had to endure, because there was no other choice.

Eliane, first of all congratulations on being storystar of the month-I enjoyed this story very much, my interest is always pricked when it comes to ww2 stories so well down with this one. Will

Eliane, first of all congratulations on being storystar of the month-I enjoyed this story very much, my interest is always pricked when it comes to ww2 stories so well down with this one. Will 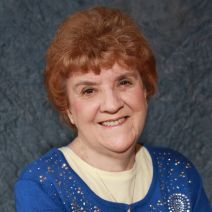 thanks. Will. If you like this story, you would like the series of WWII humorous mystery novels I have published. Mrs. Odboddy - Hometown Patriot. Mrs. Odboddy - Undercover Courier, and MRs. Odboddy -... Read More

thanks. Will. If you like this story, you would like the series of WWII humorous mystery novels I have published. Mrs. Odboddy - Hometown Patriot. Mrs. Odboddy - Undercover Courier, and MRs. Odboddy - And Then There was a Tiger. Available at Amazon for $3.99 in ebook. Hope you will check them out. Again. Thanks.