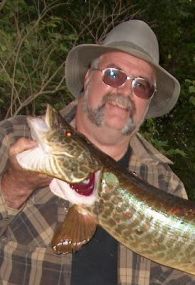 The Big One
By Herm Sherwood-Sitts

It was a mild, July, Sunday morning, when my son Ruben and I arrived at one of our favorite fishing holes. The water was calm, the sun was just coming up and the fresh air just had that “it’s gonna’ be a great day smell.” We unloaded our boat and gear.

I probably should explain what we have for a boat… You see, several years ago, my son and I bought a paddle boat for $50. After using it a few times we decided it was way too much work. Keep in mind that most good inventions, come from lazy people. We cut off the pedals, removed the paddle and inserted a used trolling motor ($50). Next we mounted some comfy seats ($20 apiece) and a fish finder ($150). Voila! We had us a bass boat.

We eased our way out onto the pond, through a channel in the lily pads. Every once in a while you would hear the deep croak of a bull frog or the splash of a fish in pursuit of a bug. We were making some small talk about how work was going while casting along the pads. The lure I was using, a black and gold, jointed j7 Rapala, was my luckiest. I would cast it out there and let it float for a few seconds. If nothing hit it, I would retrieve it slowly. The jointed lure would resemble a fish swimming just under the surface, while it wobbled through the calm water.

After a few cast, a fish hit it on top. I set the hook and while reeling it in, something hit it again. When I got it to the boat, I had a Perch with its tail missing. Ruben and I looked at each other kinda’ surprised.

I made a few more cast in the same spot and sure enough, I hooked into something big. We were only in about four foot of water and the monster was bending my Ugly Stick strait down. The fight seemed to last forever. The huge fish was pulling us through the lily pads. Rube was doing his best to keep the boat in check while I tried to tire out the fish.

We got him within six feet of the boat and we were trying to see what it was. The sun was reflecting off of the water and all I could see was two rings every once in a while. Rube stood up in the boat to get a better look.

“Is there two of them there?” I questioned him.

“No!” He said excitedly. “There is his head, and over there is his tail. It’s a Tiger Muskie!”

I didn’t have a leader on, I never liked to use them with a lure. It made the lure not travel like it should. I was surprised his teeth had not cut the spider line by now. He made several passes under the boat and then it all ended. He cut the line from the friction of the boat and he was gone.

Rube and I just sat there in silence for a few minutes and collected our thoughts.

“We didn’t even get a picture… No one is gonna’ believe us” said Rube with a smile.

We fished the rest of the morning. We caught several fish, but nothing in comparison to the Tiger Muskie. We stopped by the spot of the great battle on our way in. Wouldn’t ya’ know it, there floating in the water with three feet of line attached, was my j7 rapala lure.

We told our story and we heard, Sure Dad, yeah right Ruben. However the real fishermen knew the agony of losing the elusive Tiger Muskie.

Two weeks to the day, we hit the pond again. Of course we tried the lily pads again. No luck this time.
We worked our way out onto the lake. There is a long flat bluff with about four feet of clear water and a low weedy bottom. You can see the Sunfish, Perch and the occasional Bass swimming along. At the end of the bluff there is a fourteen foot drop-off with plenty of cover for the largemouth Bass.

The fish finder was showing quite a few were down there. I was dragging a worm rig along the drop-off. The rig consists of a few ruby red beads and a couple of silver blades. It sported three single hooks so the night crawler can be hooked to look natural.

We were trolling along the drop-off when I got a huge hit. I could feel it shaking its head.

“You better get the net Rube. I think I got a big Bass!” I said.

Rube retrieved the net just as the forty-one inch; Tiger Muskie came up about four feet out of the water.
With the small Bass net in his hand he looked at me with a grin and said, “What the heck do you want me to do with this?”

The fight was on and we decided to try and beach the monster. Rube did his best with the trolling motor, to keep from letting the fish pull us into the lily pads again. I could feel it shaking its head and then it started rolling trying to shake the worm rig lose. While doing so, it had gotten wrapped up in the spider line. It seems like it took forever to get to shore. Rube beached the boat and I jumped on shore. The Tiger Muskie was still in fight mode as Rube scooped him up in his arms onto shore. We measured it, took a few pictures and let it go.

We took a look at the worm rig and it was riddled. The only reason we caught this one is because it wrapped itself in the line. To some that read this story, it’s probably not that big of a fish; but where we come from, it’s a monster. However we think the first one was even bigger!

Awesome story. Was great you got a pic. A wonderful fisherman’s story told.

Awesome story. Was great you got a pic. A wonderful fisherman’s story told.

I sent this along to my brother (one of them, of the seven boys, only two fish) he uses fishing for two reasons. One: it helps him with his PTSD, the gift from Vietnam that keeps giving. The other is the joy he gets from the solitude, and battle of wits with Bass. Once, when a draught hit SC, he showed us where Bass like to "hide", breed, and hang out. When the water...
Read More

I sent this along to my brother (one of them, of the seven boys, only two fish) he uses fishing for two reasons. One: it helps him with his PTSD, the gift from Vietnam that keeps giving. The other is the joy he gets from the solitude, and battle of wits with Bass. Once, when a draught hit SC, he showed us where Bass like to "hide", breed, and hang out. When the water came back, I had a much better understanding of the layout under water.

Anyways, I sent him your story, because he knows all about Tiger Muskies (we are all originally from Ohio- and Muskie's are the Marlin of the Great Lakes) And I rubbed in a bit about your "Bass Boat", as he entered fishing contests all over the South to win a Ranger, fifty grand super Bass Boat, so he could "fish better." LOL Smiles, Kevin

Thank you Kev... I hope he enjoys the story. He might like "How Much Did That Fish Cost?"
I am glad that fishing helps with his PTSD. I'm sorry he had to endure that...

Thank you Kev... I hope he enjoys the story. He might like "How Much Did That Fish Cost?"
I am glad that fishing helps with his PTSD. I'm sorry he had to endure that...