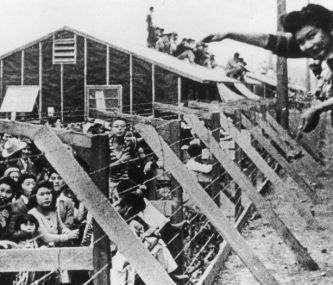 Aunt Nona was born 12-12-1920 in the small town of Pontiac, Michigan. The times were different then. Women didn't go to the hospital to give birth, a midwife and doctor delivered in the home. Her mother died giving birth to her. Her father, a farmer, tried to take care of her but he couldn't. He tried for 3 months. Then he got a hold of her mother's sister and her husband and asked them to adopt her.

Aunt Cheri and Uncle Max had no children of their own so they were happy to adopt Aunt Nona. Aunt Cheri said it was like having her own child because she was her sister's child.

Her new mom and dad bought the old Crane homestead. This homestead was her Grandfather's and her mother and aunt grew up there with two brothers. Aunt Nona didn't tell me what happened to the uncles or why her aunt had to buy the homestead. But her mom and dad were happy. Her dad wanted to make sure they would always have plenty to eat so he bought chickens, cows for milking and eating, and pigs. He planted 22 walnut trees, 2 hickory nut trees, apple, peach, pear, cherry and maple trees. He also planted a garden with all the vegetables you could possibly want, and with the rhubarb and strawberry patches they had all you could want to eat.

The Crane homestead was located 3 miles south of Lyons, another small town. The story about this town goes that it was the capitol of Michigan for one whole day. This town was right in the middle of the state of Michigan. Lyons had a furniture factory, bank, tavern, general store and a hotel. It was pretty prosperous, and with it located in the middle of the state it should've been the capitol. I heard several stories about why it didn't become the capitol. I think there was a pit of dirty business going on and some bribery too.

The farm work kept Aunt Nona busy. She weeded the garden, and fed the cows, pigs and chickens. She also collected the eggs and cleaned the barn and chicken coop along side her mom and dad. Most of the time it was just with her mom. Dad did the milking of the cows every morning and evening.

When harvest time came they picked the fruit and vegetables and canned them. Although she was quite busy Aunt Nona had a best friend that lived 1/4 of a mile away from her and they went to school together. Their elementary school was a one room school room that went to the 8th grade. The school was 1/4 a mile from them both.

When Aunt Nona went to high school she had to go to another little town, Portland, which was 25 miles away. Because her mom and dad couldn't drive her every day to school, and there were no buses to take, her parents boarded her with a real nice older couple in town. What was great about this is she could walk to school, and her friend was boarded out with her too. They did everything together. They were like sisters.

Lyons wasn't the only town that sent kids to Portland. Lake Odessa did too. This is where My Aunt met my Uncle Glendon. Uncle Glendon lived in Lake Odessa and he didn't have to be boarded out because his father had a car and was able to drive him until he got his driving license and drove himself.

In high school there were 4 couples that hung out together and out of the 4 only 3 got married. Her friend stayed in Lyons and had 14 children; actually, she lived in Muir, which was a mile from Lyons.

Dating was quite different in those times. They didn't have a lot of money, and with working the farms as everyone did, and the cars weren't readily available, they did a lot of double dating and didn't go far from home. In fact they stayed in Lyons, along with several other towns in the area. The town of Lyons had a free movie and dance every Saturday night. They would set up benches in front of the furniture factory and sell popcorn, and you could get soda and candy at the general store. You could get soda for 5 cents and popcorn was 5 cents for a big bag. My Aunt said it was the best popcorn she had ever had and there has been none like that since. They would have a local band play and they would be there until midnight. The whole family had a good time.

Nona and Glendon were married Dec.18, 1940. World War II was on but we hadn't entered it yet. It wasn't until 1941, after Japan bombed Pearl Harbor, that we entered the war.

Nona and Glendon moved to Battle Creek, where on fire trucks he made hoses for them. He started in Battle Creek, then went to Lansing, then Franklin, Indiana. Then he went to Port Clinton, Ohio, where he worked for a company named John Bean. He would work 12 hours a day. 8 of the 12 was for John Bean, the other 4 hours was for the government. He had to buy war bonds every week, even if he didn't want to, he was made to. He also did carpenter work.

Eventually they bought a trailer and moved to Lake Odessa where they built a house and they now lived. They were the youngest on the block then. Now they are the oldest.

There was a Japanese interment camp down the street from their house and Nona did the laundry for the guards at the camp. All Japanese in America were put into camps after the bombing of Pearl Harbor. Nona went once a week to the camp to get the laundry from the guards, and drop off the clean laundry. She would walk, it wasn't that far away to go.

She met this little Japanese girl, Kisha, and her mother and father too. She would go to the fence and talk with Kisha and sometimes her mother and father too. The people in the camp were taken care of. They had food and what clothing they brought with them when they were taken from their homes. And there were peddle sewing machines to make clothes with material that was given to them. Kisha told Nona about the house she once lived in and how they were taken to the camp. Kisha wanted to go back home. She didn't understand why they had to be there. They didn't do anything to anyone.

Nona would make dresses for her and other little girls in the camp. Nona would hand them over the fence to Kisha and Kisha would take them to the other little girls. Because Nona did the laundry for the guards no one stopped her. Nona would also make chocolate chip cookies and quilts and dolls and take those to them also. One day Nona went to collect the laundry, and drop off the clean laundry for the guards. The guards met her and said to just leave the laundry and that they wouldn't need her next week. Nona had so many questions as to why the guards weren't going to need her anymore, but the guards said they couldn't tell her. She went to the fence and Kisha came running to her and said her mom said they were going home this week. Nona said that was great and that she'd bring her address later so that they could write to each other, and that she also had some other things she wanted to give her before they left.

Nona went home and got things around to take back the next day. She had an idea this was going to happen. The war had been over for a while so it wasn't a surprise to her. Nona got up, had breakfast as usual, got the box she had put together last night and went to the camp. But when Nona got to the camp it was empty and the guards were gone. Kisha and the rest were gone. Even the fence had been taken down. Nona cried and wonder if she would ever see Kisha and her family, or hear what had happened to them, ever again.

Nona wasn't able to even give Kisha her address. Nona never learned what happened to Kisha. She hoped and prayed that they all had a good life to make up for the rotten start.

Lake Odessa made the camp into a fair ground and the building was there for a while. The building ended up being for horses, for the horse races they had there.

As a child I used to play there and give the horses sugar cubes, and sneak into the arena to watch the races for free.

Thanks for sharing this interesting story about American history and what life was like for those growing up before and during the war.

Thanks for sharing this interesting story about American history and what life was like for those growing up before and during the war.

Wonderful story Deb, I enjoyed reading it very much. I wrote a story called Cedar Haven which has its main character a pearl harbour veteran so I did some research into the Japanese internment camps as I went along. True life is always much more interesting than fiction. loved it...Will

Wonderful story Deb, I enjoyed reading it very much. I wrote a story called Cedar Haven which has its main character a pearl harbour veteran so I did some research into the Japanese internment camps as I went along. True life is always much more interesting than fiction. loved it...Will

Deb,
I can't thank you enough for this story. The History is fascinating, Most of my friends didn't even know that there were "Camps" for Japanese outside of California. And it is sad to note we have them again. I loved your description of dating and how folks got married early (usually). I was born in 1951, and my parent got married just before the Depression- and their Parents, well,...
Read More

Deb,
I can't thank you enough for this story. The History is fascinating, Most of my friends didn't even know that there were "Camps" for Japanese outside of California. And it is sad to note we have them again. I loved your description of dating and how folks got married early (usually). I was born in 1951, and my parent got married just before the Depression- and their Parents, well, they were born in the latter part of the 1800's- and most of America was rural back then. You caught so much of this in your story.

We need more of these stories before they are forgotten. Smiles, and thank, Kevin