The Willow and the Human

Everyone knows the Story. Everyone. Every school child is told it and every adult can recite it from memory. The story of two kids from two very different places who figured out a way to communicate. This is the Story. The Story of Missy and Vrpltx.

It had been two years since the Alien Craft had landed in (of all places) Berea, Ohio. It landed right outside a water filled quarry near a nice little park with many paths to walk around on. After the first few days, you might run into either a pack of Aliens, or a pack of Humans, wandering around any of those meandering pathways. What you wouldn’t run into were Aliens and Humans Talking.

Even though the Aliens were alien enough to be noticeably different, they weren’t different enough to be scary. The Blue skin that went from a Sapphire blue that was shiny and sharp, to a much lighter shade of blue that was more of a molted Lapis Lazuli blend of faded blues. Their hair was always the darkest black anyone could imagine on Earth. Like the velvet background of a crystal clear night in the Antarctic.

They were a bit more slender than human beings, and slightly taller, hence their nickname from the Humans: Willows. They had two eyes, a nose, and a mouth. No Ears, at least that we could see, but they might be hidden under that thick mane of jet black silken hair. Nobody had ever gotten close enough, familiar enough, or found a way to ask even a simple question like: “Oh, by the way, do you have ears?”

Every attempt at interspecies communication had failed. For two years. Two long frustrating years. Years that both species were beginning to think would never end.

Missy was all of seven and a half years old. Tall for a girl her age. She had never had her hair cut since she was born, so it hung in bright red curls almost to her tiny waist. She only had a few freckles and they were sprinkled lightly on her nose - unless she was in the sun too long, then, well, they became noticeable. Her smile was quick, flitting across her face with a frequency that would have astounded an adult. Most things made her smile with discovery, or newness, or joy.

At the moment, she was smiling at a small fish caught in a little tidal pool next to the quarry. She had taken her shoes off and left them on a rounded rock behind her as her toes squished into the inch or so of soft mud on the bottom of the small pool. She was trying to figure out how to catch the little fish and put it back in the deeper water- so she didn’t notice the slight shadow behind her.

When she did, she stood up with an even bigger smile. It was a Willow! A little girl Willow, about her age. She didn’t know how she knew that, but she did. The Willow was a bit taller than her, but Willows tended to be taller than any of the Earthlings. Willows don’t smile. Their mouths are round, and only grow narrow or wide, but no Human knew what, if any, emotion was signaled by their mouths.

Missy didn’t even hesitate. She was so excited she didn’t stop to think. She just reached over and grabbed the Willow by its hand, pulling it gently towards the pool. She did smile another surprised smile when she felt the Willow’s hand; for it felt like feathers dipped in fur- soft, supple, but strong. She loved the way that hand felt.

Her smile deepened when the Willow followed her back into the water. Still holding the Willow by the hand, Missy pointed at the fish darting around in the clear still pool. Missy let go of the Willow’s hand, knelt in the water, and tried to catch the small fish in the cup made from her small hands. She kept missing.

The Willow knelt next to her, cupping her hands like she saw the Human do, she trapped the fish easily in her frond like fingers. Her Mouth opened wide. Almost as wide as Missy’s smile now was. The Willow looked at Missy as if to say: ‘What do I do now?”

Missy put her hands under the frond like cup of the Willows hands, and slowly rose. She would catch the fish if it slipped out. The Willow rose too. As if they had rehearsed it, they marched facing each other taking small side steps, until they got to the edge of the lake. Then Missy made a little rocking motion to start both their hands and arms swinging like a hammock.

On three the little fish was flung in a gill flapping arc into the bigger lake. The Willow and Missy stood next to each other still holding hands. One pale skin covered human hand, one frond like fur covered slender blue hand. They stood like that for several moments. Missy felt a tug on her hand. Looking up at the Willow, she saw the blue ring of The Willow’s mouth was wide open. A sound came out that was somewhere between a whistle and a flute. Pretty, soft, but very very high pitched.

Missy’s smile grew wide again. Then wider still as the Willow gently guided her towards another shallow pool in a collection of rocks. There were several fish in this one. Missy caught on immediately. The two “girls” linked hands again, catching one fish at a time, walking carefully back to the lake they would stop at the edge, and Missy would start their arms rocking again. Saying out loud:

“One. Two. Three!” And yet another fish would go for a gill flapping arc into the water.

This time it was the Willow that shook with joy. The Willow’s mouth was as wide and round as she could make it. The Willow pointed to herself and made a Flute Whistle Noise. Missy tried to copy it, she got close but not exact. It didn’t matter. The Willow took her by both hands and they swung each other around like young Square Dancers, with just as much glee. The Willow making a long High Flute sound, the Human laughing.

When they stopped to catch their breath, the Willow gently reached out with a long finger and tapped Missy on the chest. The Willow pointed at her own chest and Flute Whistled her name again. Missy whistled it back, a bit better than the first time. The Willow beamed again, but poked Missy in the chest again.

Even at seven and half years of age, Missy knew she was being asked what her name was, by a Willow! But how do you Whistle Missy? Missy said her name out loud, but the wide round mouth narrowed. A few more tries and the Willow’s mouth was a mere pucker. A tear formed on the Willows face. Missy knew what that tear meant, she felt like crying too! She had made a new friend, and couldn’t even tell her her name! Missy was frustrated.

Missy thought she had an idea. One that might work. The Willow learned to count much faster than Missy had learned in school. Maybe she could learn the Alphabet too? It was worth a try, and just that thought made Missy’s smile as wide as her face as she looked up at the Willow. The Willow tilted its head on an angle to look at Missy. Missy smiled her biggest smile yet- and a tentative little “O” formed on the Willow’s face.

Dragging the Willow with her over the rocks, Missy took the Willow to a Sandy Spot, got a stick, and started making letters in the sand. Starting with A. When she had the whole alphabet written out. She said them over again, pointing to each letter with the stick and carefully sounding it out. The Willow followed her every move and sound with intense concentration. Then Missy pointed to the letter “M”- and in clean sand wrote : “M.” Then she did it again with: “I”. Until she had written: Missy.

Now both the Human and the Willow were about to burst with smiles. One as wide as a little girls face could stretch, the other a wide open oval O that stretched into a complete circle. The Willow took the stick from Missy pointed it at every letter in the Alphabet and made a different Flute Whistle sound for each letter.

Then, still holding Missy’s hand in hers, she took the stick and drew a “M” in the sand, making the “M" Flute Whistle sound. Then an “I”. Then an “S” And so on. Making Missy the first Human to be able to say her name in Willow! They both Flute Whistled Missy’s name in Willow.

Then the Willow started drawing letters in the sand, sounding each one out in Flute Whistle. She wrote very careful copies of the following letters:

It didn’t take them long.

As soon as they got on the main path a group of Willows, and a group of Humans stared as a small human girl, and a small Willow burst onto the path holding hands. Both groups stared dumbfounded at the scene of a human holding a Willows hand. That dumbfounded stare turned into pure shock when the Willow pointed at Missy and Flute Whistled her name! Jaws dropped in both Species when Missy pointed at the Willow and Whistled a pretty close approximation of Vrpltx.

The Adults immediately started to point, whistle and say their names. Within hours, the two species were working at a common language. Humans started to carry flutes to get the “accent” right, and Willows started carrying tablets with letters on to get the words correct.

Oh, and the Willows did have ears.

Missy saw the first one when she taught the Willow to do French braids. When she was done, they both looked in the mirror and Flute Whistled: Pretty! 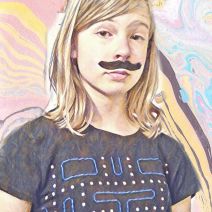 Aw... this is adorable! I wish I had a Willow friend like Missy does.

Aw... this is adorable! I wish I had a Willow friend like Missy does.

If Willows ever show up, you would be a wonderful Missy. Smiles, Kevin

If Willows ever show up, you would be a wonderful Missy. Smiles, Kevin

Totally charming, delightful, and inspirational. If Missy and Vrpltx can become friends, learn one another's language, and gain an understanding of one another through such far different means of communication and verbalization, then there is hope for the rest of us! Thanks for writing and sharing this story, Kevin! Beautiful! :-)

Totally charming, delightful, and inspirational. If Missy and Vrpltx can become friends, learn one another's language, and gain an understanding of one another through such far different means of communication and verbalization, then there is hope for the rest of us! Thanks for writing and sharing this story, Kevin! Beautiful! :-)

Thanks Jd, yep...I whistled while I wrote this, a tad off key, but still fun. Smiles and thanks! Kevin

Thanks Jd, yep...I whistled while I wrote this, a tad off key, but still fun. Smiles and thanks! Kevin